Now I know how exciting it is the receive an FCC! 86.2 pts.
In Australia anitum is not recognized as a separate species so while this was purchased as Wossner Black Wings (from my friend Atian Tsai), it had to be 'renamed' for the award.
I dont have the official measurements but these are mine - 4 flowers open, Dorsal width - 62mm, Petal width - 17mm, Flower length - 220mm.
Please enjoy. 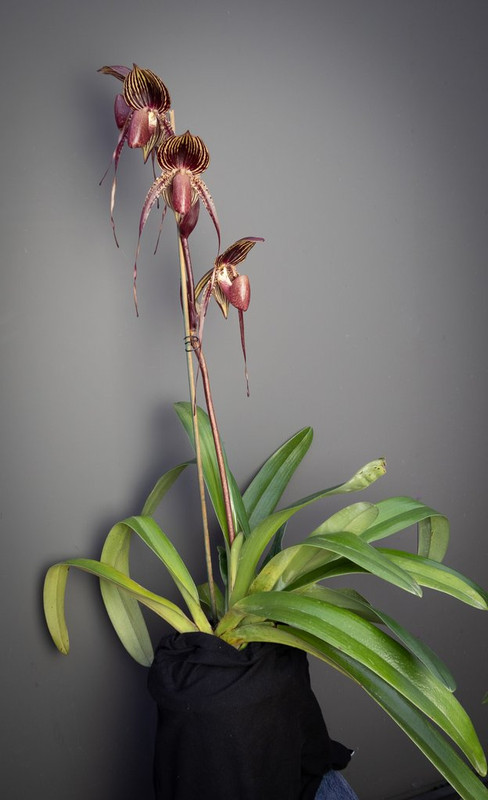 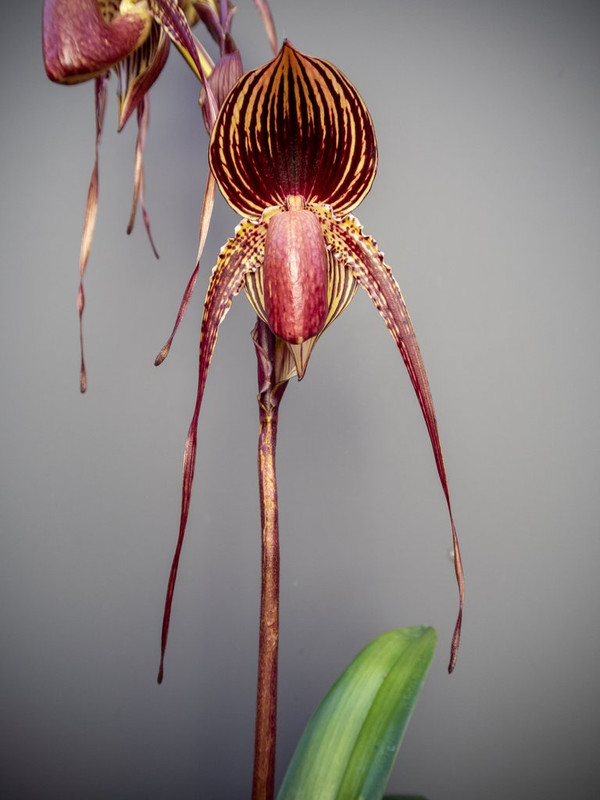 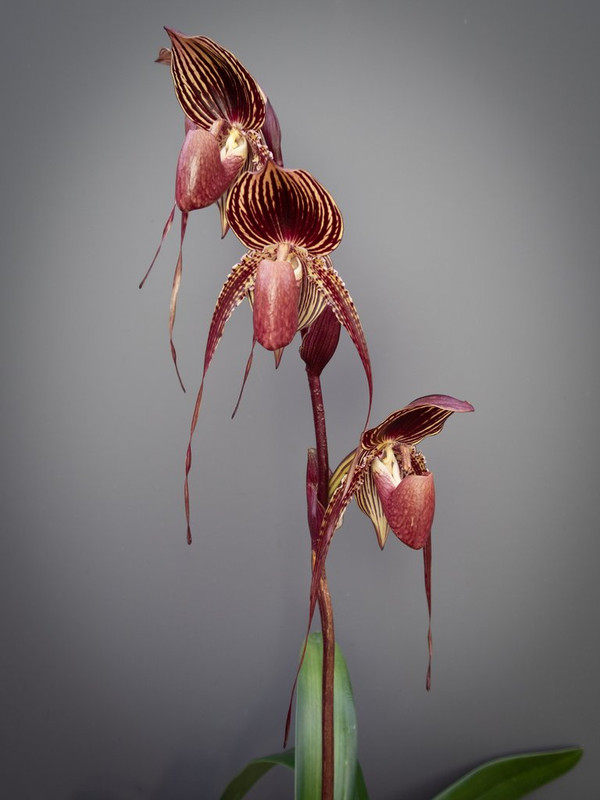 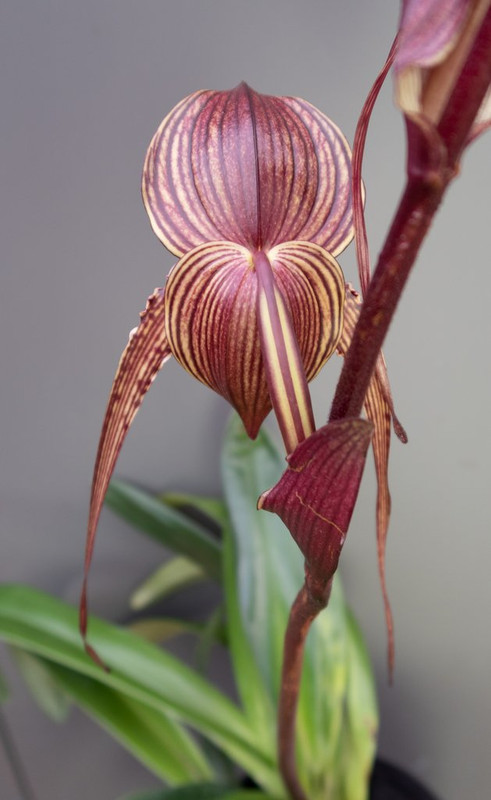 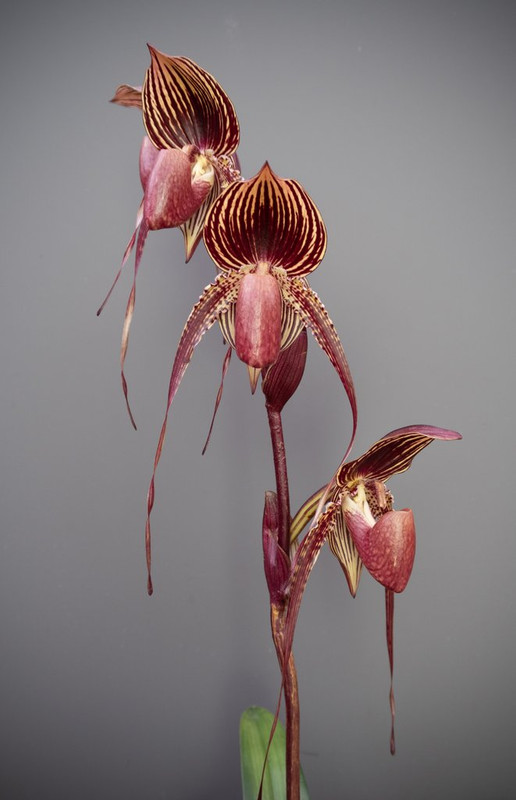 Stunning and congrats on the well deserved FCC!

An amazing clone. Well done on the FCC

That is fantastic Stephen. I am really excited for you. Well deserved too. The dorsal is amazing. Is this the first time you have flowered it? What is the background of this plant?

So how was it judged? In front of judges? All our shows and meetings have been cancelled although I believe you can still have plants judged for awards through photos.

Thank-you all.
I sent photos to the 'Registrar'.
2 judges then came to my home and 'assessed the plant for judging'.
The registrar, on their preliminary advice, arranged for 5 judges to meet. i took the plant to a judge's home for assessment.
They really went out of their way to accommodate me and the plant.

Its a WBW from Atian. Breeder Shih Yueh, Taiwan. Ive owned it for about 2 years.
First flowering on a big multigrowth plant.

I would like to use it as a parent but need some ideas and a suitable 'co-parent'. (David, I wish 'Paracombe' was in spike....)

The judges went above and beyond to award your plant. Great to see such passion.

Unfortunately, my 'Paracombe' doesn't appear to be flowering this year, or if it does, it won't be for a few months.

The only other thing I have open at the moment is my big Bel Royal and the Michael Koopowitz. I am not sure either would be a great match. A few other things in bud but they are a couple of weeks off.
M

Very well done Stephen. At least we can get the judges to come on board sometimes. Hopefully will get to see it on Tuesday if there are no more lockdowns.

Awesome for you!! Beautiful and obviously special for the judges to have gone out of their way so much to accommodate. Congratulations!!

YeeeeeHaaaaw! I don't really like Paphs. all that much, but this one is really beautiful...color to die for!

Well done Stephen. Love the dorsal, and the petals, and the sepals and the pouch. Thanks for sharing.

Wow! So nice! Congratulations on the FCC! Love it

A recon intel and then special judging for one plant! Wow that is incredible!

This definitely came from anitum line. The dorsal is gorgeous!!

Breeding, I suggest another dark flower with smaller leaves!
M

Stephen after seeing it tonight it is as good if not better than the photos give it credit for. Very well done my friend

Ozpaph said:
In Australia anitum is not recognized as a separate species so while this was purchased as Wossner Black Wings (from my friend Atian Tsai), it had to be 'renamed' for the award.
Click to expand...

DrLeslieEe said:
This definitely came from anitum line. The dorsal is gorgeous!!
Click to expand...

I might be dumb as a doornail, but I really can't fathom, that 'anitum' isn't recognized in Australia? I can understand, that botanists can discuss at what taxonomic level, it should be recognized: whether it's a species good in itself (P. anitum), or whether anitum is just a variety of adductum (P. adductum var. anitum)?
That anitum should be considered just another adductum, simply does not make sense to me! It's like saying dianthum is just another parishii! C'mon!

What really pushed me over the brink, is the fact, that Stephen had to rename the plant to have it awarded. Whether one sees 'anitum' taxonomically best considered a species or at varietal level, The Royal Horticultural Society has registered P. Wössner Black Wings as the cross between P. rothschildianum (seed parent) x P. anitum var. adductum (pod parent), as they for P. Johanna Burkhardt has P. rotschildianum x P. anitum (var. anitum - to be botanically specific) as the parents.

If we ignore the fact, that you have to be blind not to recognize the difference between P. Johanna Burkhardt and P. Wössner Black Wings, how comes that the Australian Orchid Council can allow themselves the luxury to overrule the RHS registrar? Thus contributing to further confusion, when it comes to the future breeding with and of these hybrids?!