incharm said:
The leaf of compactum is similarly like standard philippinense, broader and softer, but smaller in size. While the leaf of roebelinii is narrow, hard and thick.
Attached picture is a comparison between both varieties. I took this picture two months ago. In the picture, the right side two plants which in narrow leaves are var. roebelinii. And the left side two plants are var. compactum, in wider and softer leaves.
In additional, maybe in temperature area, all philippinense varieties can have straight up leaves. But I think we still can separate them from the width and substance of the leaves.
Click to expand...

Thanks. Really helpful that you have these side by side photos. From this informationa, it like true roebeliniis may be pretty rare then as I’m not sure I’ve seen many photos of Paph philippinense with long narrow stiff leaves.
J

SlipperKing said:
Thanks Jim for the ID and thanks InCharm for 5he comparison.

That’ll be great if you can.

Love these - One day I will try multis again 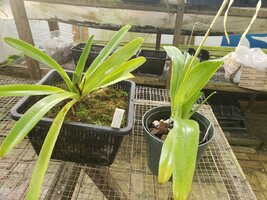 It does grow with more straight leaves than the wider leaf ones. 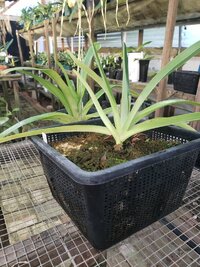 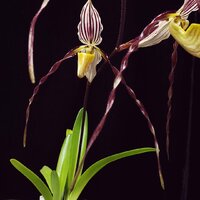 I have an older pic of a blooming with 5 flowers i think and longer petals.

Both are great, especially the album, congrats!