I purchased this complex white paph as a single growth in-bloom plant this past spring, and has been working on three new growths since then. I noticed what appears to be a sheath on the biggest growth and I’m wondering— will the rest of the leaves on this growth catch up in size to those of the old growth or is it going to stay this compact by the time it blooms? 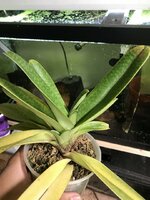 Are you growing it in higher light than it was previously?

looks healthy. ? not too dry?

I agree with Ray.
What kind of fish do you keep in your aquarium?

I've also been impressed with the performance of my complex (avatar pic) under LEDs. Been spending the afternoon trying to sort my paphs by light requirements based on Braem/Baker and whatever seemed reliable on-line because I know I tend to overlight paphs under LEDs. I"ve been growing a hookerae var. volunteanum for several months under LEDs. And I just got in a new hookerae. I didn't realize how yellow the volunteanum had become until I saw the new hookerae next to it. But, the volunteanum is in bud. What to do?
This avatar complex is in bud (second time this year), there's another growth that will probably complete and bloom in spring, and another growth just starting. The foliage tells the story though and the foliate on this one is a little rough. I don't mind making choice that considers beauty of foliage as well as flowers - but drawing a delicate line under LEDs isn't the easiest thing in the world. I way overdid it when I first got my LED setup, I changed out all my bulbs (spotlights for me) to 1K fewer lumens (good move) and am thinking of stepping it down again by just increasing distance a bit. But I'm nervous about it ! We just want to light the heck out of our orchids.

Make small changes and measure the light with a meter - document and record. Adjust depending on results.

Mealy bugs, should I be more aggressive at this stage?
2