I don't know if I've ever posted pics of new slipper orchids since I don't buy that many of them (or at least any recently). Below are a paph schlimii I received in september when orchids limited came to town, a stripling division of a paph wardii from the binghamton ny orchid society, a paph venustum from the same christmas party a few weeks ago (they buy plants in bud and raffle them to each person attending the party - nice! free raffle I should add) and a phrag pearcei that was in bud at our cnyos christmas party beginning of the month glen decker/piping rock orchids attended also.

Jason Fischer gave me the phrag schlimii seedling for helping drive him from his previous meeting in albany the day before and showing him some native orchids where some of my friends were on the way. it's potted in a peat-based media with the rest being standard bark/perlite/charcoal. he said that they grew very nicely in their greenhouses this way, and since my other attempts at growing this species either stood still or went backwards, i'm very happy that this one is growing! the venustum was in a group of plants that the stos bought just for giving away in their christmas party free raffle to everyone attending; there was a very nice paph delenatii x malipoense in very high bud, but I hesitantly passed it and some nice masdevallias for a species venustum. it was one of the few plants that weren't in bud or flower, but it has two nice developing growths so there's hope that it may flower soon. the phrag pearcei I purchased at our cnyos christmas party from glen decker; it was in bud and I like the smaller phrags (and I chose not to spend a lot more for many of the other extremely nice slippers and others that he brought to sell at our party). the stos party raffle plants came from a wholesaler in hawaii, and many of the slippers were very healthy (maybe we all should move to hawaii ) 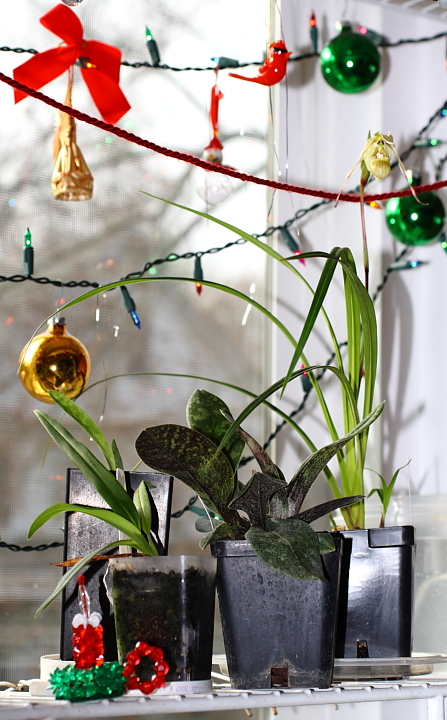 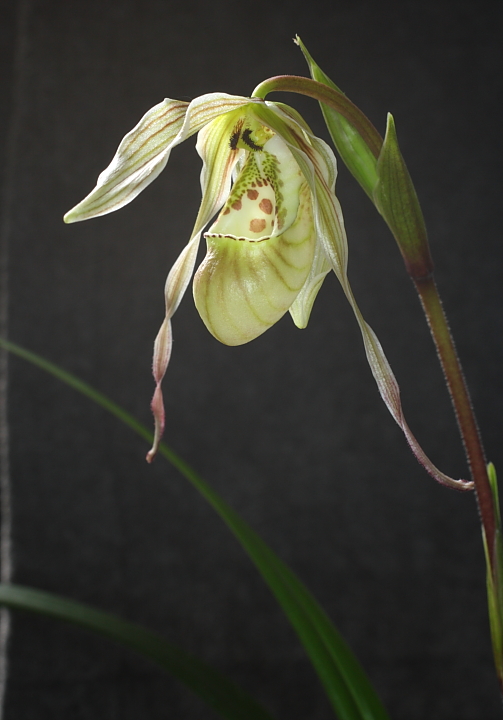 closer of phrag pearcei (sunlight behind, fill light in front) 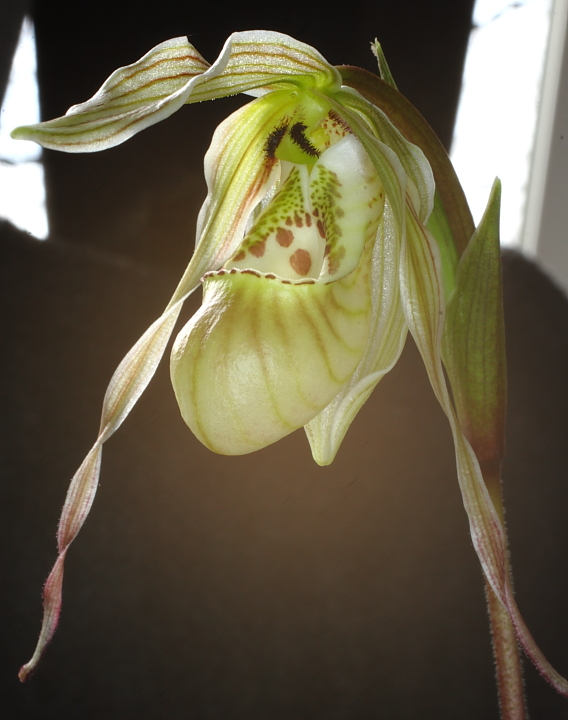 closeup pearcei, very nice details in flower! I think the flower may open up a little more, and I think I see another bud forming in the sheath. glen says when in doubt with pearcei, water! .. and if you're not sure after that, water it again . It grows with it's feet often placed in running water, and often is underneath flooding water 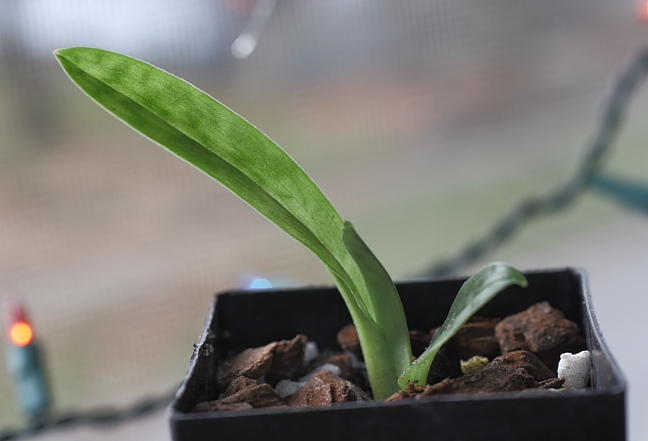 this is a very small division of the paph wardii that had been auctioned off at the stos christmas party, for $40. I asked the winning bidder if I could buy a division for $10 which he readily accepted. even though the plant was absolutely huge, the main part of the plant was sort of raised up above the the potting media, and some of the new growths either were extremely tight to the main part of the plant, or were out in the air and had only dried root nubs. I found a small new shoot with a very long single root, so put it into a very tall, narrow pot. I had expected to find a larger division, but asked the new owner if my little one died if I could try another one later. the pot is much too large width-wise for the plant, so I put a lot of styrofoam peanuts on the sides of the pot away from the plant to take up space and prevent the root from rotting

i'm using orchiata-based media for anything i'm repotting now. the phrags have nice media so i'm leaving them for now, but the wardii is in #5 orchiata, charcoal, sponge rock, aragonite sand, some small grodan rockwool cubes and bone meal (as is everything else i'm repotting, phals and others included) note - except for some of the large phals and such that I'm using the same overall media but with larger 5a orchiata
Last edited: Dec 25, 2011
N

Nice Phrag, thanks for sharing.
R

I love your pearcei! I'd love to have one that light!
D

(sigh) oh well; I managed to catch and fix the five or six 'phrag pearcii' typos but missed that one. I probably could have written 'one of those pouch-type things that always dies eventually'
B

thanks! the petals are twisting now on the pearcei

cnycharles said:
(sigh) oh well; I managed to catch and fix the five or six 'phrag pearcii' typos but missed that one. I probably could have written 'one of those pouch-type things that always dies eventually'
Click to expand...

B
New Paphs from the Exotic Plant Company