I bought these two along with some Catasetum hybrid seedlings in early August.
These are both SVO8081 Cycnoches (Jumbo Cooper x Swan Cascade)
The flowers opened about two weeks ago. Now the flowers are withering away. I've never had Cycnoches flowers last this long before!
Looking forward to next year's blooming already since the spotted one has such a nice flower count for a first time blooming plant. 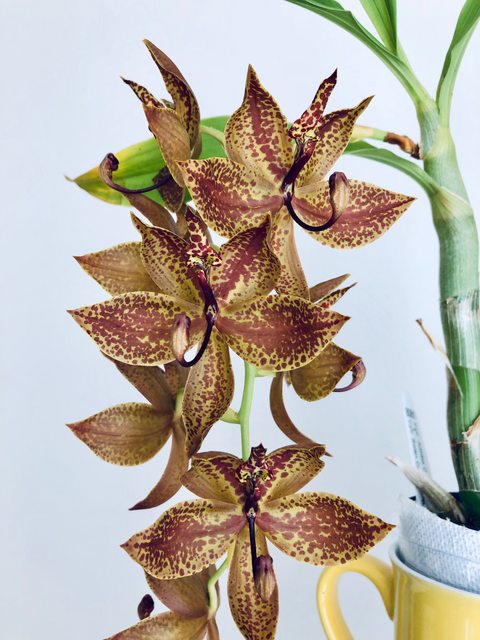 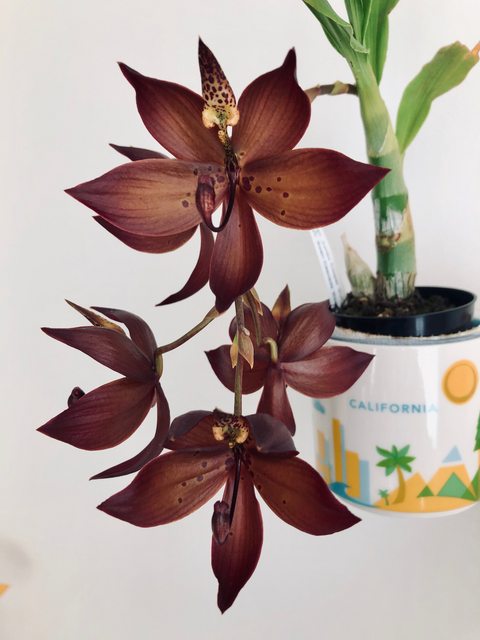 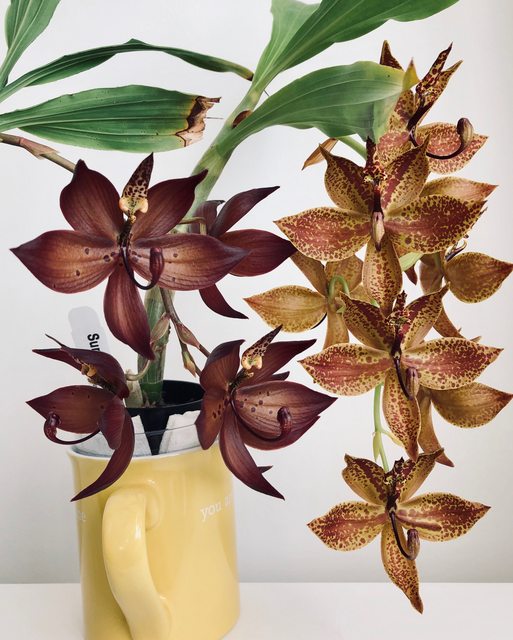 The colour and patterns of these two are really nice. Very niice purchases.

love the spots and the brown

Both are very nice ones, the coffee and chocolate colours are lovely......but very soon the will grow out of your coffe cup......into another dimension......

These are lovely!
N

Nice, thanks for sharing. I seem to be in possession of a number of Catasetum and Cynoches suddenly, (they sneak in a few at a time). Some I flowered but since my knowledge is really low, a lot have just become a mass of bulbs and leaves without blooming.

GuRu said:
Both are very nice ones, the coffee and chocolate colours are lovely......but very soon the will grow out of your coffe cup......into another dimension......
Click to expand...

They are both in a 3inch seedlng pot, and the weight of flowers cause them to easily tip over. So I have them inside a heavy container for now.
Come spring, I plan on slide them into a larger pot for more room for the roots and the stability.

NYEric said:
Nice, thanks for sharing. I seem to be in possession of a number of Catasetum and Cynoches suddenly, (they sneak in a few at a time). Some I flowered but since my knowledge is really low, a lot have just become a mass of bulbs and leaves without blooming.
Click to expand...

You want these right up against the window as they like a lot of light to do their best. Also, a lot of watering during the growth phase.
E

Both are very nice. I especially like that first one.
N

Thanks for the tip. We now don't water Clowesia, etc. when the leaves are gone but its harder to figure the ones that keep leaves.

I think that one has a good potential to have a very high flower count in about three years from now. Stay tuned!

NYEric said:
Thanks for the tip. We now don't water Clowesia, etc. when the leaves are gone but its harder to figure the ones that keep leaves.
Click to expand...

Eric, you might have read the catasetum care instructions or advice from people. I think those guidelines are literally just guidelines and do not apply to all the plants in the big group of Catasetinae as a whole. The dormancy period can vary a lot form species to species, some lasting only a couple of weeks and others for months.
Many of the hybrids contain genes from a bunch of different species, so the behaviors of these plants may not be even along rigid spectrum.
Basically, I let my plants to be my guide.
I water as long as there are green leaves. I try to keep up with good watering during the entire growth stage, but I try and water especially more during the pseudobulb expansion stage in the latter part of the growth stage. Some Catasetums will bloom early in the season well before the pseudobulb starts to expand. Others will bloom a few times in the course of months. Other will wait until after the pseudobulbs have fully fattened up for the year.
Once they start to drop leaves, I continue to water but I ease on them by lengthening the interval between watering.
Once fully bare, then, I only water if the pseudobulb develop any signs of dehydrations. wrinkles. I prefer to keep the pseudobulbs plump at all times.
Some plants that do not lose all the leaves but maintain one or two top leaves during the winter, I treat them the same as the bare ones. Water only when there are any signs of dehydration. It depends but generally it comes to about every 2-3weeks or even less often for some. It's not on schedule but by plant's demand. So observation is the key.

Clowesia and Mormodes generally bloom out of bare growths late in season. Just make sure not to allow them to get dehydrated and you'll be fine. Hybrids that contain these species can behave very differenty. So, again, let your plants be your guide rather than treating them on schedule. For example, FDK has Clowesia among others in its genetic makeup, and they can bloom on bare canes late in season like Clowesia but it can bloom much sooner with all the leaves. I have bloomed some FDK in the middle of summer. My FDK After Dark 'SVO' bloomed in late November with all the leaves on. This same plant also bloom later in winter with no leaves based on other examples I have seen.
Now, I have yet another FDK (the genetic make up is very similar to After Dark in that one parent is Mormodia Painted Dersert) in bud that just started to pop open.
This plant last bloom in January with all the leaves on. It is blooming again now with all the leaves on. So, go figure!

With Cycnoches, they will bloom as soon as the growth matures and the pseudobulb reached its full "fatness" and this can be any time from summer into winter. They can bloom multiple times in season.
You must log in or register to reply here.
Share:
Facebook Twitter Reddit Pinterest Tumblr WhatsApp Email Link