My Phals have arrived!

Got my package from Schwerter today!

Now I just have to let them stay in the box for 12 hours (per Schwerter's instructions) to let them slowly get used to the warmer temperatures after their cold trip here.

Jon inspected and approved of the package:

Good luck. Never heard that advice before about acclimatisation!
David

Never heard of that either, I'd be too excited and unpack them right away!

I hadn't either until I got the email. I managed to not touch the package until after six hours, then I caved.

It's been so long since I ordered from Schwerter that I had forgotten how thorough they are when it comes to packaging their plants. There was also a heat pack in the box, so I worried for nothing basically. 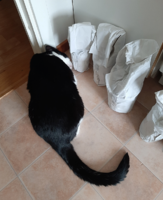 Today, I spent the entire day (almost) repotting all of them and got a better look at their roots. All of them had okay root systems, some good ones, but the Yaphon Blue Bird didn't have a great one. It also had something that looked like it could be stem rot, but I couldn't tell if it was old or new. I'm going to keep an extra eye on it.

I potted all of them into straight bark (five were in sphagnum when I got them) and we'll see how they do. Oh, several of the Phals came with spikes/in bud!

That was an awesome surprise. Especially, the Phal. LD's Bear King x George Vasquez cross I decided to take a chance on getting, despite there only being pictures of the parent plants. Its bud looks ready to open very soon (unless it blasts).

One thing I realized after placing my order was that the Phal. Wiganiae was a young plant and not BS. I didn't read the description on the webpage until much later and it's two years from BS.

The positive side is that it's super cute being as small as it is. I really hope I can keep it alive now.

The Phals I have right now

T
The Coryopedilum Chronicles I - Setup and Potting Mix

Something in spikes or in blooms

My first award- An American horror
2