My first Paphs in years on the way

It's been over 10 years since I have had a Paph in the house. I got frustrated over a 5 year old rothschildianum that developed stalks and buds that promptly turned brown and dried up. I wanted to try a multifloral again even though I was not successful with the roth so I placed an order with Paph Paradise for a phillipenese and and just in case I also ordered an appletonianum. Should be here early next week. Got to admit I am excited about it. Hopefully I will be successful with at least one of these. I have always leaned toward the paphiopedilums as my favorite flowering plant rivaled only by the Phal bellina. I'll be seeking lots of advice. Photos when they arrive.
P

Well of course I have no beautiful blooms to show you but I am proud to present you with my two new paphs. I look forward to the journey. I am incredibly impressed with both the quality of the plants and the amazing packing. Wish me luck and don't be hesitant to offer tips if you have eperience with either of these two. 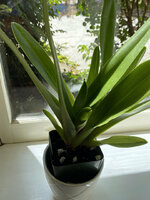 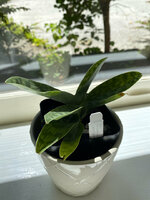 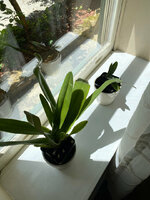 At least you got a roth spike previously. I have some roth hybrids that haven't bloomed after 10-15 years.

Some of my Paphs of the subg. Sigmatopetalum in 2022

Help; my Hilo Leopard bud was broken by the monsters at FedEx!