Guldal said:
Only if you spell it like DLE taught you! The plant is named after an esteemable, victorian orchid gentleman, mr. Fairrie - not after the fairies, no matter how delectable enchanting it appears!
Click to expand...

This is TOO WEIRD. According to my newly acquired bio of Frederick Sander by Arthur Swinson (published 1970), and with a preface by David Sander, the gentleman's name was spelled with one "r", Fairie. (p.153). So then I figured that they added the second "r" when they Latinized his name for the species name. But in reading a little further into the page, I see that the author also refers to the species name as "fairieanum" with one "r". More digging required.

Guldal said:
I find it a very nice flower, you've got yourself, masaccio!
(No matter what the OOCD'ists say about the slightly(!) pinched dorsal - of course, if you go for an award, its nice to know what improvement to look for... and to know, that your first time bloomer posseses potential! Otherwise, I would, in your shoes, just enjoy it, every second it flowers!

Thank you! I am enjoying it quite a bit. I can't believe the photos in this thread are from a mere 6-7 days ago.

masaccio said:
Thank you! I am enjoying it quite a bit. I can't believe the photos in this thread are from a mere 6-7 days ago.
Click to expand...

If all goes well, the flower may last a couple more months!

I'm interested to know what you find out about the name (rather a letter) discrepancies. Please update when you make a discovery.

Paph paradise have a whole page on the cultivation of this species. Worth a look if you are in doubt.
David

masaccio said:
...it seems possible to me for it to have had a direct influence on the art and architecture of southern Asia...
Click to expand...

I am often struck by how the art and other cultural expression of pre-globalized societies reflects the forms of their regional nature. Makes sense.

DrLeslieEe said:
If all goes well, the flower may last a couple more months!

I'm interested to know what you find out about the name (rather a letter) discrepancies. Please update when you make a discovery.
Click to expand...

As I referred back to the Swinson/Sander book I was reminded that at the time it was written the term "Cypripedium" was in wide common usage to all include slipper orchids, including the Asian species that we now know more distinctively as Paphiopedilum (of the orchid subfamily Cypripedioidiae). And I remember as well that my first orchid, a "bulldog" paph, also purchased in the early '70s, was indeed labelled "Cypripedium." I had thought that when the transition from Cypripedium to Paphiopedilum became more established, this also entailed a different spelling of the species. Silly me.

In both of the Cribb and Pridgeon references I have, the spelling is fairrieanum. It seems reasonable to assume that Mr. Kramer and other popular orchid culture writers, as well as others such as the author of the Sanders bio (who was not necessarily himself an orchid enthusiast, as his books encompass a wide rage of subjects), were not too bothered by the exact spelling of long, complicated Latin names as long people understood what they were talking about. I personally find the same phenomenon applies to pronunciation. It seems the explanation is as simple as that.

It also seems reasonable to assume that Mr. Fairie's name is correctly spelled. He wasn't an especially notorious fellow, so it would be difficult to check.
Last edited: Jan 30, 2021

The spelling with one "r" goes all the way back to Lindley's original description of the plant. All the early books in my orchid library spell it with one "r". I am woefully ignorant of the rules of botanical latin, but in The Genus Paphiopedilum, Phillip Cribb states that Lindley made an orthographic error that led to the improper spelling for many years.

Just for fun, here's a screen shot of the illustration from Gustav Reichenbach's Xenia Orchidacea: 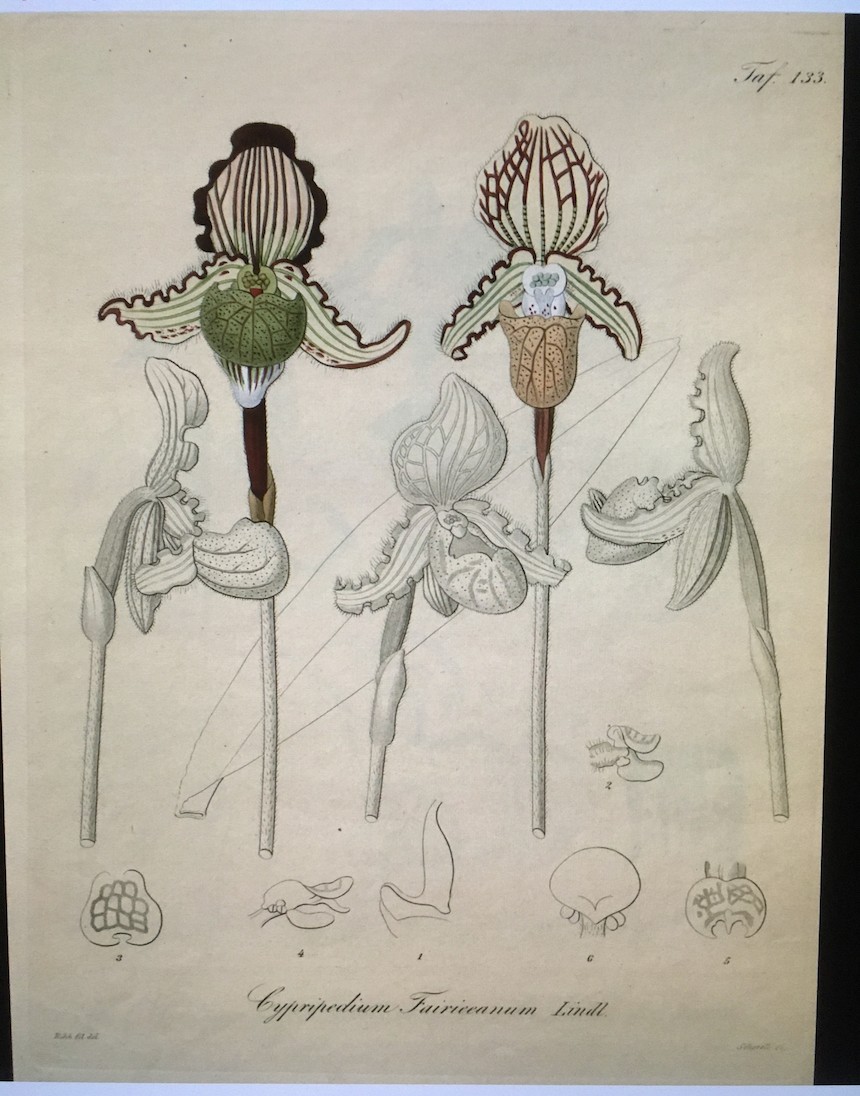 Hm. Do we know who originally named it, against which Lindley's one "r" spelling would have been deemed incorrect? Or are there hard and fast rules about Latinizing proper names for botanical use? I'd be surprised. Or could Cribb just be calling Lindley's usage incorrect because it didn't fit with his own preference? These guys have serious egos.
Last edited: Jan 30, 2021

I've decided my position on this. In my "currently unconventional" spelling of the name, I'm in good company.

Lindley officially named it it, when he published the species description. I do believe there are strict rules for the latin names used for all species. I believe that's why Cribb insists that two r's are needed.

I have the 1963 reprint of Veitch's Manual of Orchidaceous Plants, originally published in 1887-1894. Since it's in the public domain, here's a photo of some of the text regarding Cypripedium faireanum: 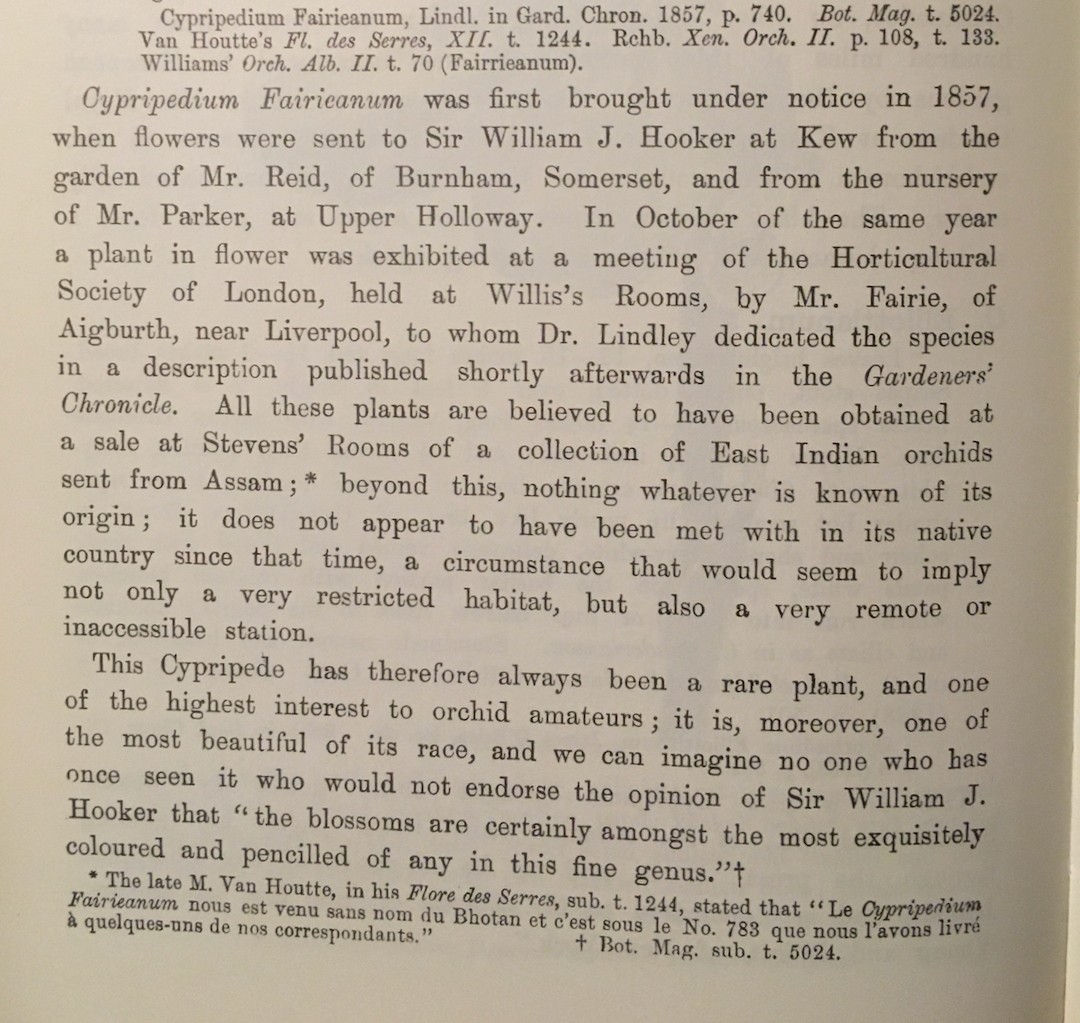 I can't argue with Hooker's comments. It is my favorite Paphiopedilum.
Cheers,
Paul

This certainly resolves the issue at hand. How wonderful of you to display these documents. One can certainly imagine worst fates than spending time learning the civilized history of this beguiling species (while at the same time listening to Barbara Bonney singing Bach and Purcell).
Last edited: Jan 31, 2021
You must log in or register to reply here.
Share:
Facebook Twitter Reddit Pinterest Tumblr WhatsApp Email Link