My first award- An American horror

Everyone has said that getting a plant awarded was the kiss of death. I didn't know how soon it would happen...

A few weeks ago I remembered that one of our OS members was taking plants to a show in KC across state, I had hoped I'd have something in bloom, I'd never entered a plant into a show before. Either bad timing on blooms or hectic work schedule, you know. So as the time drew nearer I'd noticed that I might have two- a paph delenatii for sure, and, if the time was exactly right and the stars and planets aligned and the orchid gods smiled, a catasetum Dagny. These plants are very near and dear to me since I'd named the hybrid after my wife, my first named hybrid (thanks to Fred Clarke.)

The days drew nearer and anticipation grew, when finally it happened. Everything fell into place! I was giddy! The day of the plant pick up (the Thursday before the show), I drove over 300 miles between work, home, MoBot, home. It was a grueling grind fighting traffic and an 8 hour work day of drywall hanging (5/8" 12' commercial grade. No fun, but it's part of what I do). I get to the drop off, and they're loading plants into a truck bed. At this point, I should have turned around and gone home. But I wanted to share my plants for the first time.

Reluctantly I loaded them up and took extra special care to fit mine in nicely. Everything looked good. I had to work overtime that week (yes, tomorrow is my first day off in 2 weeks), so while hanging drywall ceilings on a Saturday I got a call from a strange number. Hesitantly I answered. On the other end of the phone was Marilyn LeDoux! She informed me that the catasetum had won an AM of 82 points! I jumped up and down with excitement! The guys at work were looking at me like I grew another head... After a little explanation they understood, as well as non orchid people can understand. They were happy for me and I went about my work day.

Reeling with excitement, I checked my email. The show chair informed me that the plant had won a first and a best of class, easily. That night my wife and I went out for our anniversary. Everything was right with the world. She congratulated me and alerted social media for me.

The "weekend" came and went, Monday I swung by MoBot to pick up my plant, adorned with awards. When I pulled up, the show chair woman was distraught. I knew something was definitely wrong. She explained that the plants had been in her truck bed for over 24 hours, covered by a black bed cover, under the sweltering sun. She had to give a lecture at work that day. It was a particularly hot day, maybe 85 degrees. When I got to the box, my heart dropped.

The flowers were decimated on both plants. Fried. Over hard. Dry as a sandbox in Death Valley. The leaves were scorched and wrinkled. I grabbed the box, not knowing what to say, quickly grabbing a spare bottle of water to try to nurse the wounded plants. I went on my way, disbelief. Disillusioned. Disheartened. I set them in a shady spot in my grow room, hoping for the best, preparing for the worst.

Today the del is perking up a bit, leaves unfolding, on the mend. The catasetum is recouping. Burnt, curled leaves, it looks tired. I came away with an award, and a hard lesson learned. Never leave your prized possessions in the care of someone you barely know. 3 years of growing, nearly decimated in one day.

Tonight at the OS meeting, before even walking in, I was greeted by concerned members. Distraught members. Members who told me of similar experiences in the past. Also the president and the treasurer came up to me, checkbook in hand. News traveled fast. He wanted to know the cost of the damage done. I respectfully declined. I told him it wasn't the society's responsibility. Plus, how do you put a price on something like that?!

Lesson learned. My first award, a hefty fee. Was it worth it? We'll see.

Congrats on the award! I'm sure the plants will pull through with some TLC.

Great story and congratulations. Hope all turns out. On the brightside the award is forever, though.
O

Fingers crossed that t.hey pull through for you, also congrats on the award!

OMG! I hope the best for a fast and sustainable recovery of your so loved plant! Fingers crossed!

i bet it will make it. congrats!
M

Congratulations on the award! My best wishes for a speedy recovery. Make divisions!

I've been down that road before too. after seeing how others orchids were treated during breakdown at shows, mine never go anywhere without me to care for them. So sorry for your plant, but congratulations on your award

Meh. Congrats on the award, you should be proud of that.

I hope that the show-chair is removed of her show duties going forward! What on earth was she thinking?? I'd be pissed if I was on her society's board! How many plants died in her possession? I don't know but it seems to me that the show chair should probably know better than to leave other people's plants in her truck bed on a warm day - covered with black! Really?

Lesson learned but hopefully she will be taught one as well. Really pretty sad. Hang in there Adam!

Thanks everyone. I think the plant will pull through, but with minor setbacks. I couldn't believe how many society members came up to me and told me similar stories, how they'd never again hand over plants to go to shows. But, also, I heard no one volunteering to take over the position. If my life schedule allowed, I'd volunteer in a heartbeat.
N

Not to make light of your bad experience, but you should publish this story somewhere. You wrote it well, and others could benefit from that sad event. I hope you'll tell us someday soon that the plants both revived.

Congrats on the award and Best of Class.

I agree, well written and a valuable lesson to share with others.
L

Congrats for the awards.

A few points:
- Here, the organisers of a show take days off, to be fully at the show job (or they are retired so it's not an issue).
- The plants are brought to the exhibition directly, if it's not possible, they are kept in the GH of one of the organisers to be in good conditions.
- Retrieval is in the same lines.

It doesn't avoid all issues, whatever you do, the plants suffer somehow at a show but at least everything is done to keep them safe. And given the money, and time, and love, involved into the growing, the least organisers can do is to care about them.

Ouch. You are lucky they are alive. When I first read the words 'truck bed' I started to imagine flying out the back, getting fried or mix like a blender with all the rest. When I saw 'black liner' I was sure they were fried!
That said, having done show photography for a smaller club and seeing all that is necessary, many times there are no volunteers who will step up and often people don't have time off around show times. Things happen if you have never done something management wise before and plants suffer... can be a very tough situation where few people feel compelled to do things when no one else will and they mean well but aren't prepared
Congrats! Hope things improve
A

I know a very famous grower in CA who simply refuses
to show his magnificent plants anymore for just the reasons
you mentioned. He's won many awards, but his plants
have suffered much abuse. As he says, it just ain't worth
it. 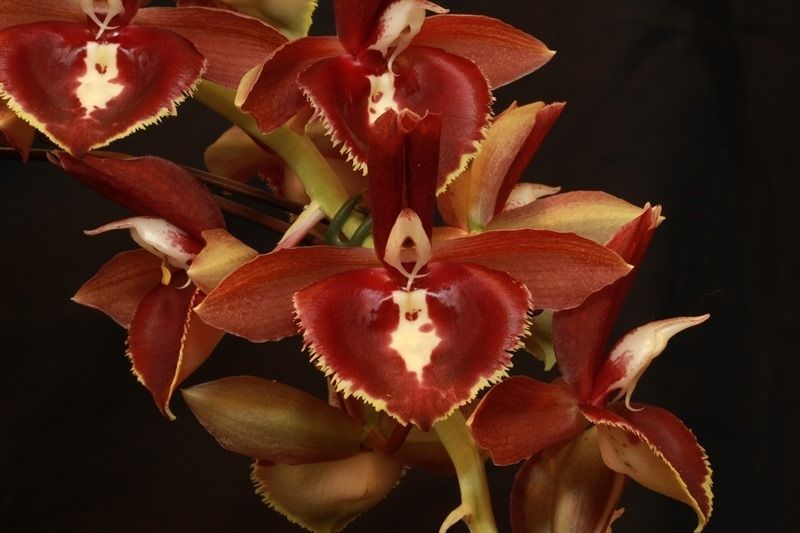 The plant went to Marilyn LeDoux. That way I can still visit it. It has recovered and is putting out a new growth with a spike. The fried growth has come along nicely as well.

way to go out with a bang! nicely done.

Beautiful flower -- congratulations! A good solution for the plant, also.

Thanks. I think cordovan was a bad call on the color. Even the picture seems off. In natural light it is a much more dark violet/ fuschia tone. But, traveling 300 miles in dark heat could have taken a toll. The judges said it was a little beat up. I wonder how it could've done under better circumstances. Oh well...

Friday at 10:28 AM
Julius
J
I
hello from the Netherlands