I’ve been meaning to do a grow list/collection post for a couple of months but it kept slipping my mind. Then I had a redesign of my growing area so decided to do a thread combining the two and will add to it as things change and the collection grows. I also thought some members might be interested in the full story plus the ‘build' of my growing area and journey thus far.

The current collection is as follows. I intend to expand the Paph side of things of the most, followed by the occasional Phrag and may utilise the recently spare (see below) vivarium for either Masdevallia’s or perhaps a few mounted epiphytes; haven’t decided yet.

I’ve only been into this hobby for a little over six months but have been inspired by people on this forum and elsewhere as to how to grow my orchids as I don’t have (nor will have anytime soon) a greenhouse and to maintain marital bliss, I have to keep most of the windowsills clear of plants…

Originally, after reading and seeing what Karma had achieved with enclosed vivariums over at orchidkarma.com and a couple of other folk had done with theirs on orchidforum.eu, I bought a large Exo-Terra glass terrarium with light canopy, some computer fans with a variable controller and a Lucky Reptile Super Fog II humidifier. The idea was to keep all my orchids in a nice, controlled environment that wouldn’t impact on the rest of the room/house. This seemed to work well and everything in there produced new growths and a couple of new arrivals produced spikes within a month or two. 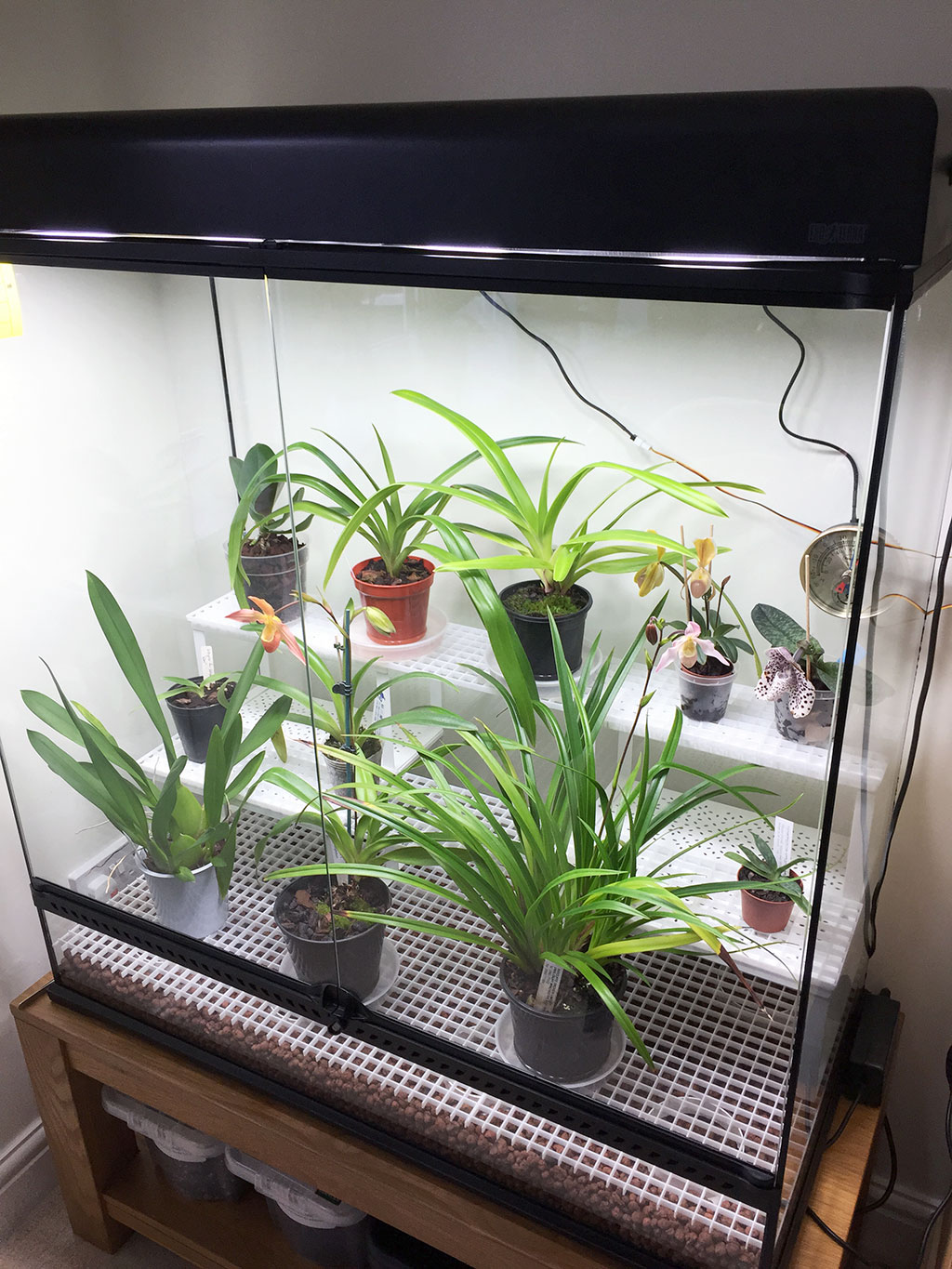 As you can imagine, I soon started to outgrow this and a few Paph’s started appearing on the kitchen windowsill, a couple of Phal’s on the spare bedroom windowsill, etc. Much to my surprise, my wife suggested turning the spare bedroom, where the vivarium is, into a more dedicated orchid room with a sofa bed instead of the large double-bed which was currently in there gathering dust (thinking about it, if she’d given me carte blanch over the room, I’d have put a sofa in there anyways so win win!). This would then give me a wall that could house a metal rack system of 3 or 4 shelves, approx. 5 feet wide and 18” deep. I guesstimated that this would give me enough room for maybe 150 plants. So, things were moved, rack was ordered and promptly built. 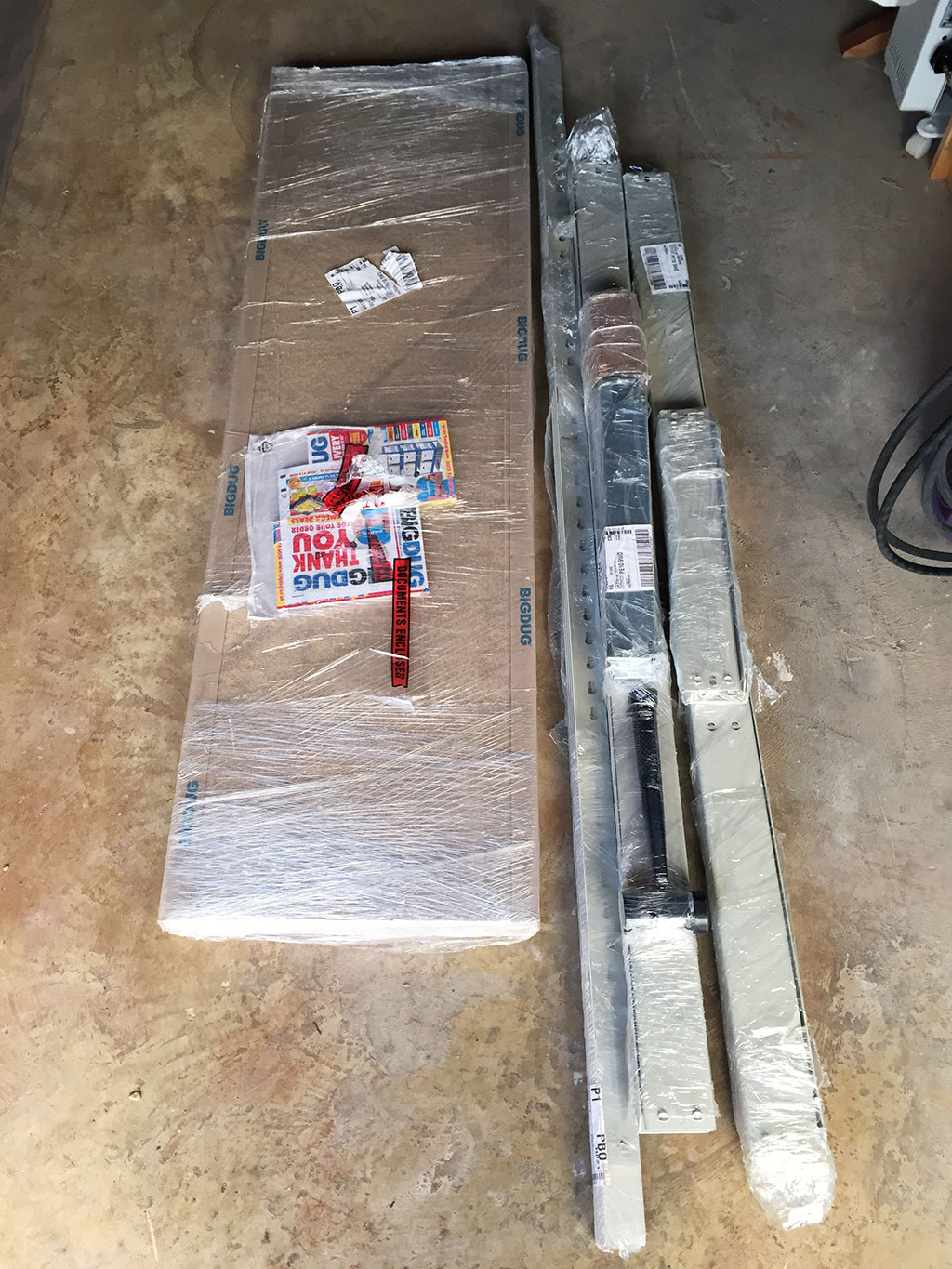 Didn't take too long to put together once I'd decided where the shelves were going; boltless design so just a few taps/whacks with the rubber mallet to attach each beam to the uprights.

(I put a couple of my phrags in the centre tray for size comparison). 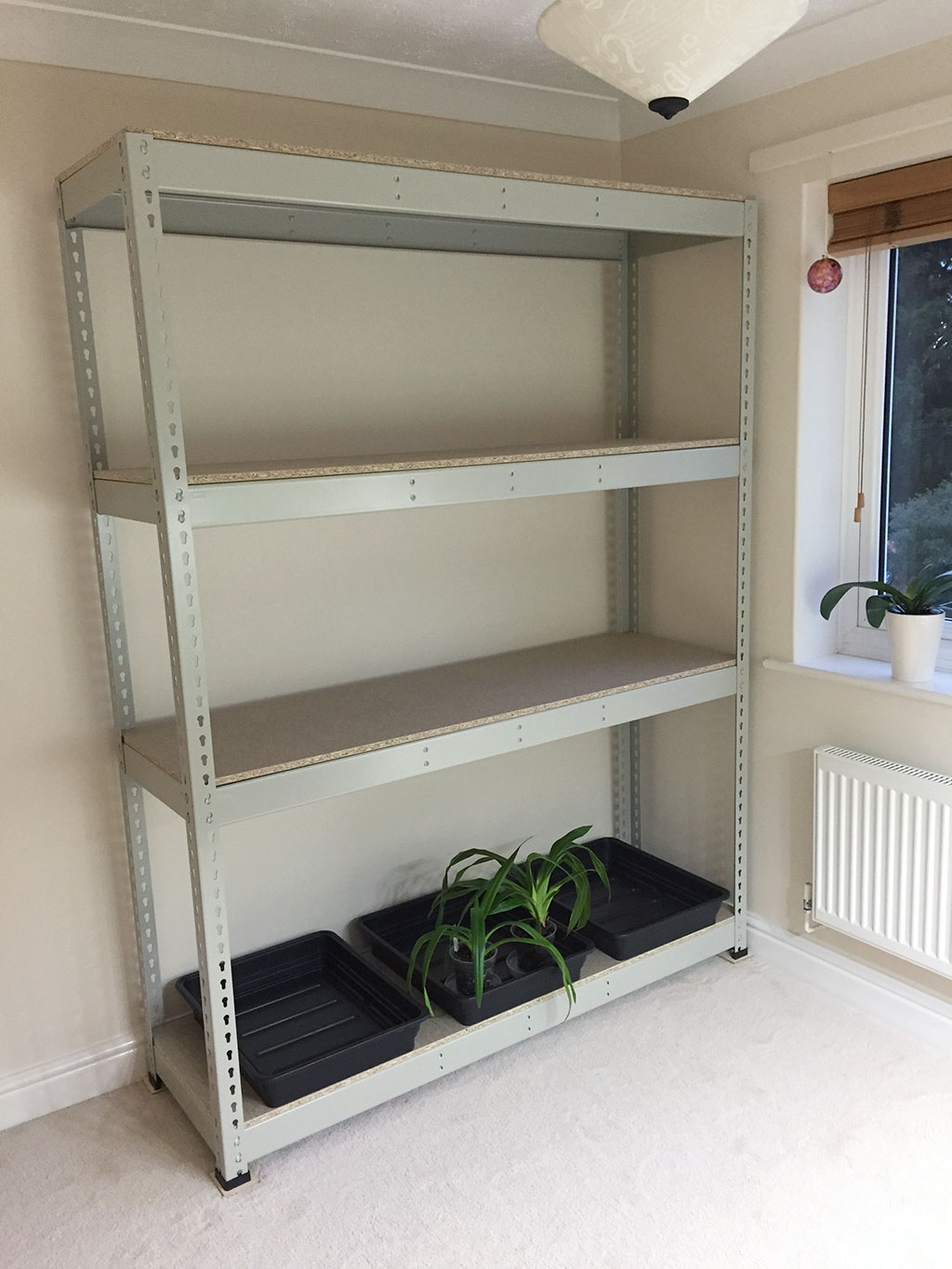 Once built, I was able to take detailed measurements of the inside of the shelf space to work out exactly what lighting to get. Wanting to get the most light possible, I managed to just squeeze in some 5ft T8 single 58w units by carefully selecting fixtures that would *just* fit within the side beams of the racking (I have less then 1mm spare each side).

This image looks weird because of the angle of the shot (the sides of the rack look curved inwards but they're not in real life, they're dead straight). 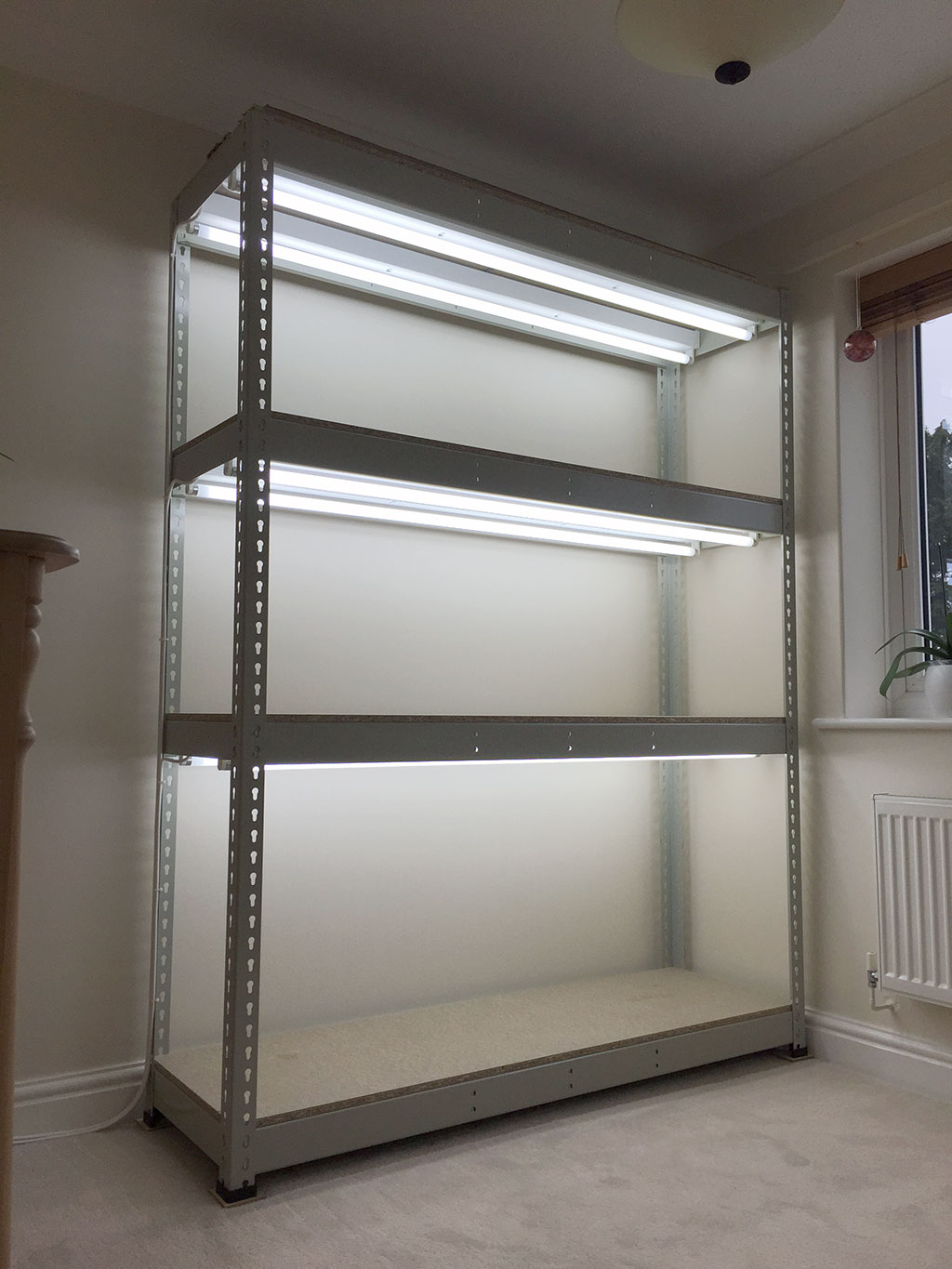 The installation of the T8 fixtures was a bit of a pain because the size of the fixture is almost exactly the same width of the chipboard shelf and that sits on a wide lip of each metal beam so you can’t fit everything to the shelf and then simply place the shelf into position. The wiring had to be measured and tacked into place and holes drilled for mounting the fixtures, then remove the fixtures, fit the shelf and finally, re-fit the light fittings and connect wires, etc. I don’t think I’d like to do another one but now it’s done, I’m really happy with it. Lighting goes right to the very edge of each shelf and it all looks made to measure which I like

Here's a shot of how they look once mounted to the underside of a shelf: 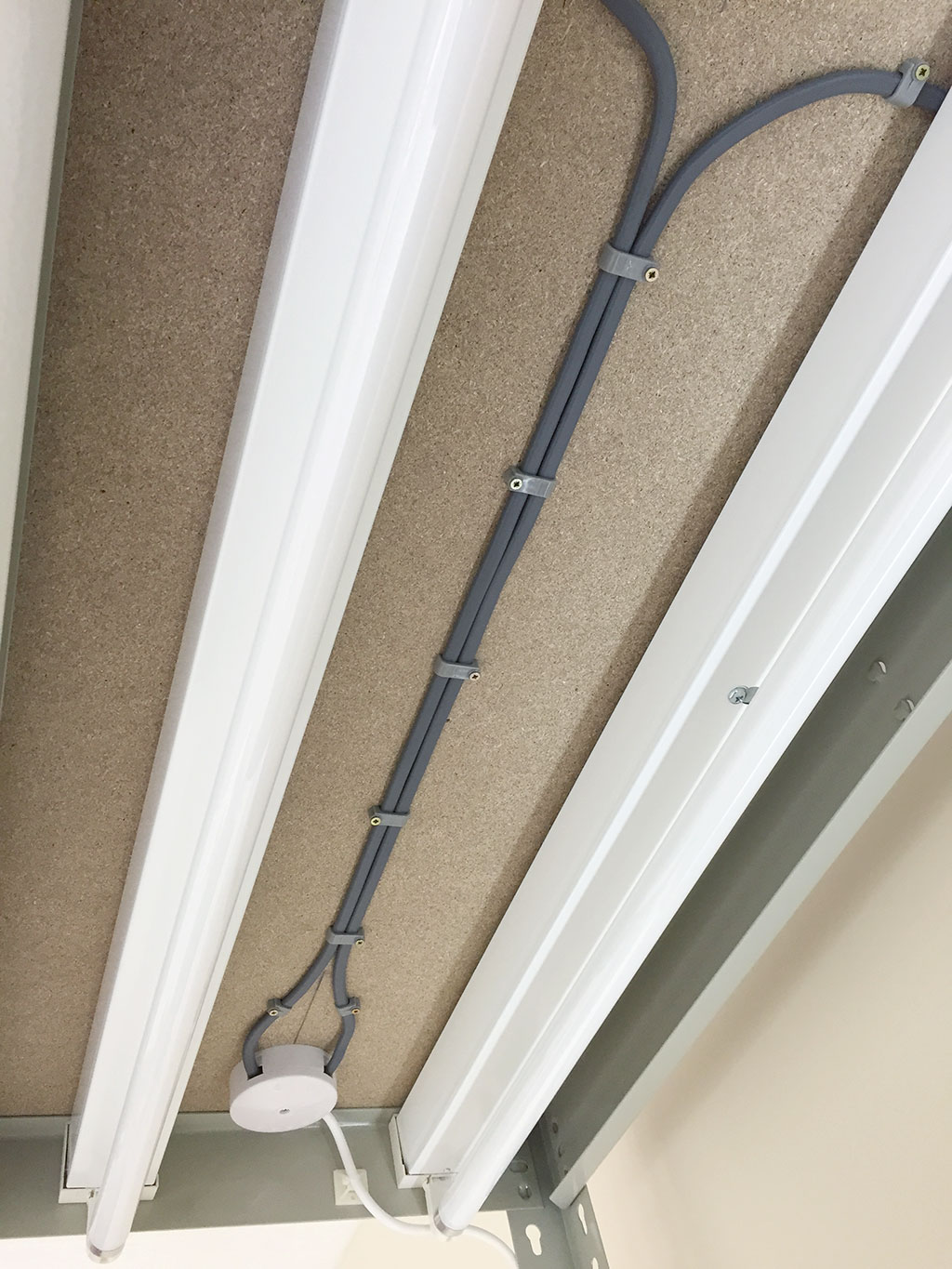 I’ve bought a slightly bigger humidifier to take care of the whole room rather than using the Superfog II as it’s really built to be outside of an enclosed space with a pipe attached. If you remove the pipe, it then spits water out the top and onto whatever the unit is sitting on so not really ideal. I plan on having RH about 60%-65% which should be plenty for the paph’s and phrags but not enough to create mould problems within the room and I’m only running the humidifier during the day right now.

All that’s left to do is sort out a couple/three decent fans as the small computer ones I used for the vivarium are (I suspect) far too small for this new growing area. I’ve already moved the plants ‘in’ and am currently using a pedestal fan that we have for air circulation. I can see me having a very happy upcoming year (and probably the next few at least), populating the rack with new plants

If anyone has any questions, please feel free to ask and likewise if you have any suggestions, I’m more than happy to hear
Last edited: Apr 21, 2016

Very nice! You can fit quite a few on there....you need some multi Paphs.
A

You did a very neat job and it looks very, very good. I'd
love to see it loaded with plants.
M

Looking good. You should have a lot of new space but I bet if fills up quickly.
N

Thanks for sharing. Looks good but a word of caution. Particle board versus humidity, . Carpet versus humidity, .
Is the Phrag on the right the Ainsworthii? BTW, nomenclature is species name in lower case, hybrids capitalized.

Very neat setup, nice and clean. Your plants look great and healthy, too. Good luck with your new project!
G

NYEric said:
Thanks for sharing. Looks good but a word of caution. Particle board versus humidity, . Carpet versus humidity, .
Is the Phrag on the right the Ainsworthii? BTW, nomenclature is species name in lower case, hybrids capitalized.
Click to expand...

Thanks Eric - names amended now. I like to be accurate so appreciate you pointing this out.

Yes, the one on the right is my Ainsworthii; this was the first orchid I ever bought. I originally started with the Phal. NoID (White) my wife 'gifted' to me after I did some research on the net and kinda criticised her use of normal peat compost and watering habits for it. So in reality, it's all her fault

I hear what you're saying about humidity and know you have first hand experience of this Hopefully 60%-65% won't cause problems (unless I have a catastrophe of course)... I work from home so I'm able to keep a very close eye on things in there.
G

Wendy said:
Very nice! You can fit quite a few on there....you need some multi Paphs.
Click to expand...

Funnily enough Wendy, I have recently added a couple to my 'wish list' which I hope to acquire this year. I saw a couple of really nice show plants at the Harrogate OS Annual Show a few weeks ago and kinda fell in love

Very nice Gary and I hope all goes well for you after all your hard work. Just a slight word of caution re the multifloral paphs St. Swithin etc. They do require more light than the other paphs and they do get quite large when mature -----
maybe that's the time you can convince your better -half that you need more room!!!!

Looks really great! I would paint the particle board to protecy it from inevitable drips...

Also 65% may cause mold issues unless you are exhausting out of the house..50 should be fine for the plants.
G

abax said:
You did a very neat job and it looks very, very good. I'd
love to see it loaded with plants.
Click to expand...

This is the sort of thing I am aiming for: http://www.slippertalk.com/forum/showpost.php?p=572550&postcount=1

That's a great set up looks good and the plants look very healthy to I recognising soe pots and lables there of a couple of suppliers I use.

Remember that plants grow bigger too! So your 150 may need to be adjusted! other than the particle board which might attract moisture and get mold, it looks fabulous. At home depo and other places they also have those mud room shoe trays that are good to use on the bottom of plant shelves.
G

Bought myself a 'proper' fan now Really does the job compared to the Dyson pedestal fan I was using as a temporary solution before. 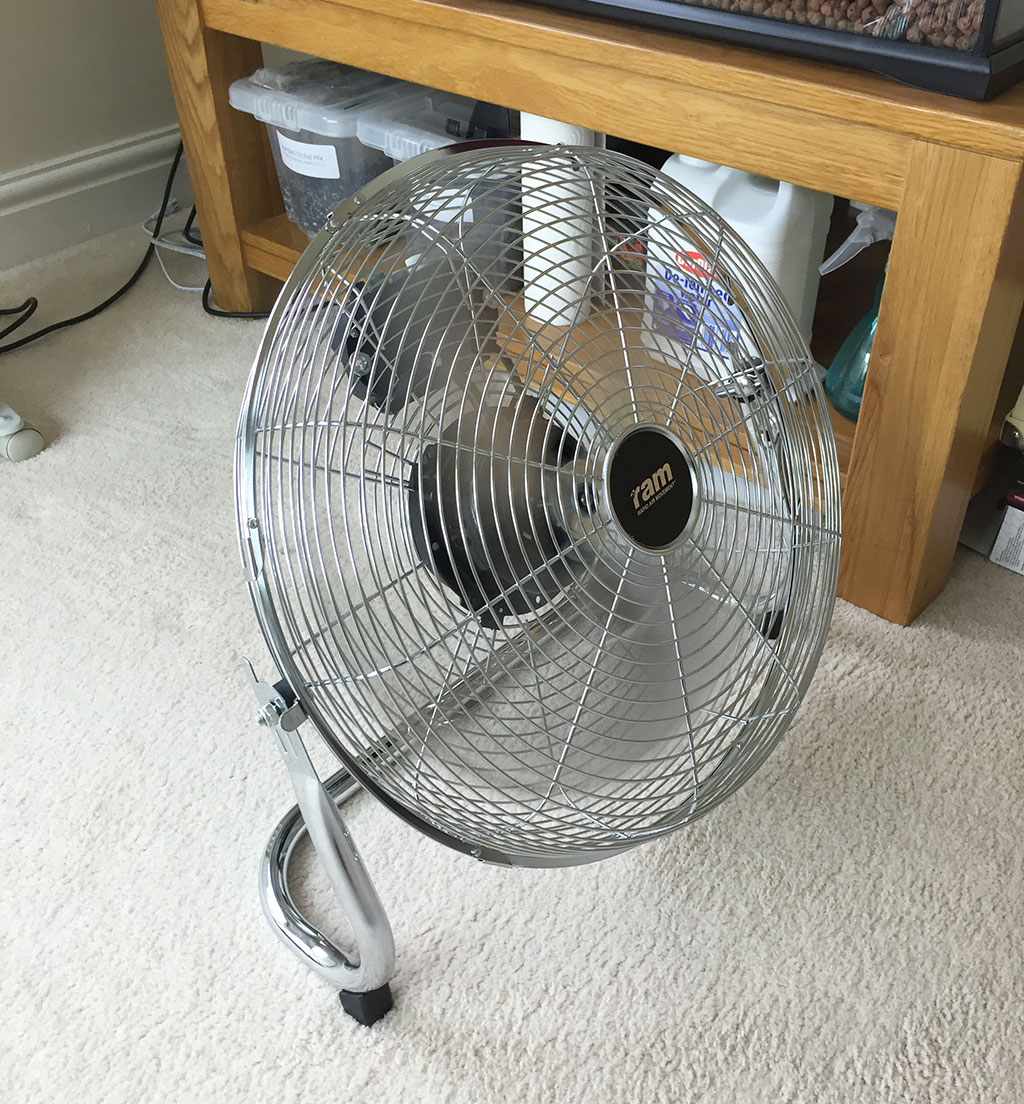 Went to the London Orchid Show at RHS halls on Saturday and came away with the following: 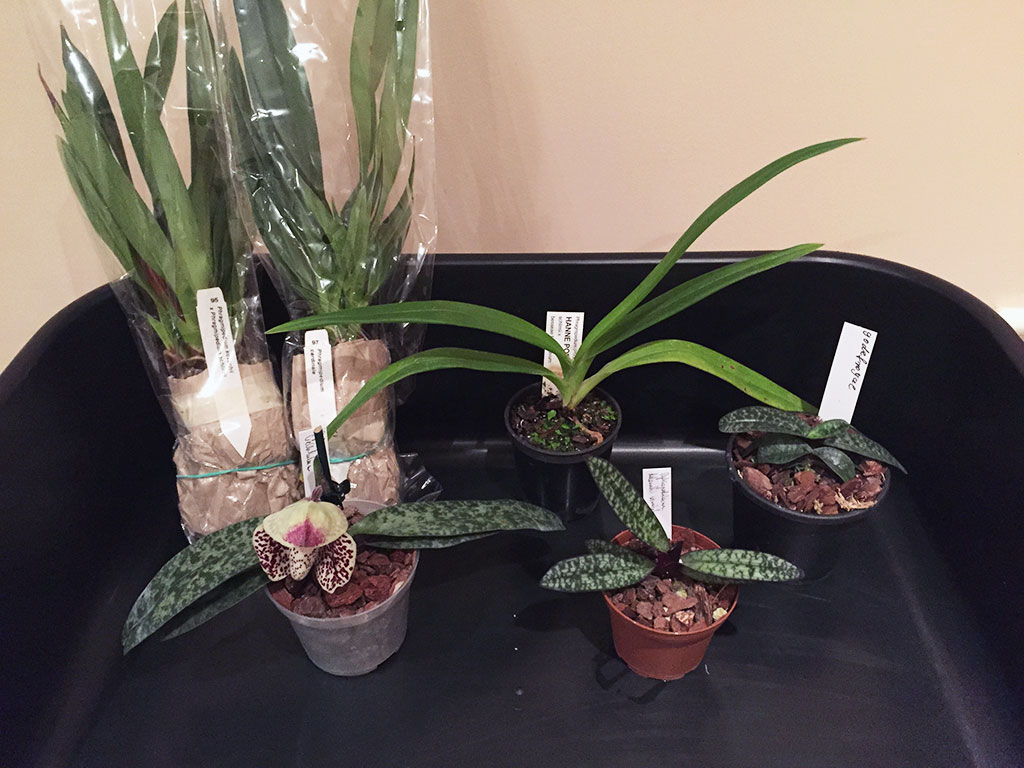 This was my first time visiting the London Orchid Show and it was definitely the best show I've been to so far. It'll certainly be a firm fixture on my calendar in future years.


abax said:
You did a very neat job and it looks very, very good. I'd
love to see it loaded with plants.
Click to expand...

Not really 'loaded' yet but after the new arrivals from Saturday, this is where I'm currently at: 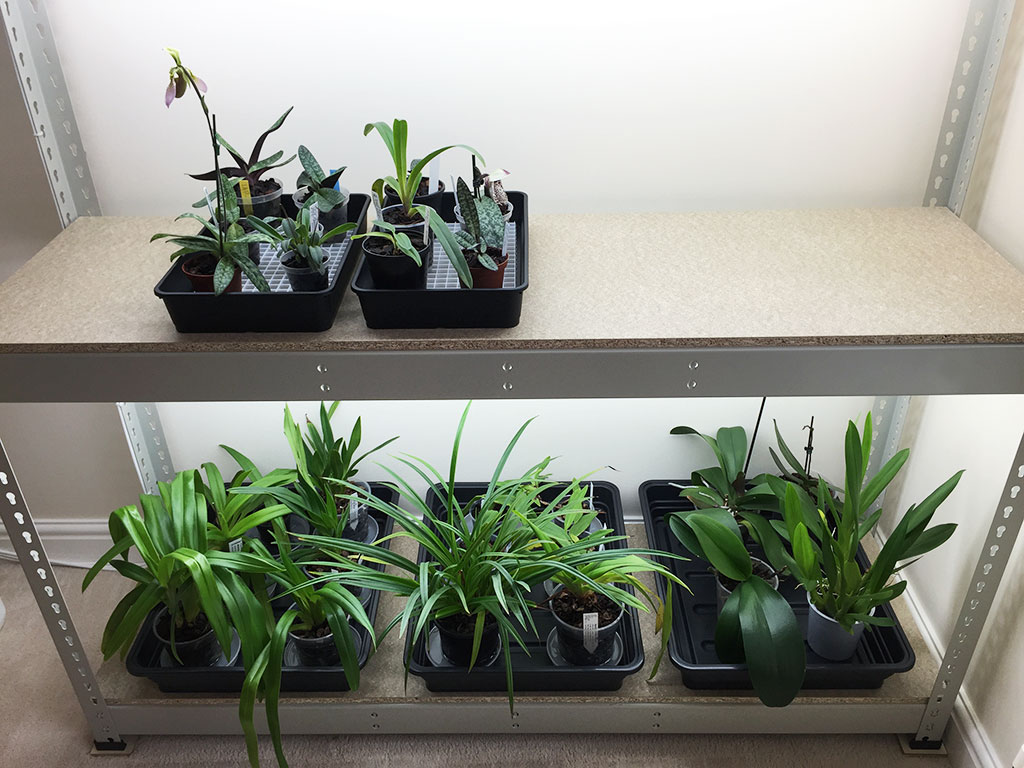 That's a nice haul from London Gary. Now it's a must you pay a visit to the International Malvern Show in June!!!

phraggy said:
That's a nice haul from London Gary. Now it's a must you pay a visit to the International Malvern Show in June!!!

I fully intend to When I asked several of the Int. growers such as Peruflora, KOPF and KJ Orchids if they did any other UK shows, they all said Malvern...

Thursday at 11:07 AM
BrucherT
B
J
Need input on a phrag

Automation experiment for my hobby collection