This is the same one I recently bought after Leslie posted pictures of his 'Mango'. A few problems have been dealt with and the main growth is progressing well enough. Unfortunately a short new growth that had started before it arrived (about 4-5") seems stuck. I wasn't sure it whether it was growing or not, so I put a small dot with a magic marker on the leaf it's growing up against. No progress in several days. So, what I'd like to do is pop it off. My question is, would there normally be another growth bud that will kick in to replace the stunted one I want to remove? Thanks!

Why do you want to remove a healthy growth? I would not touch it. Just be patient, maybe moving to your place was to much stress for it and it just takes a little rest. If you cut it the next growth may take a year to appear...

Oh, I don't think it's healthy. I thought I had made that clear. Sorry. The older growth is doing fine, pushing up a new leaf. The younger growth looks dark when I peer down into its crown. One leaf had to be removed from it due to bacterial rot. Shipping in cold weather didn't help and the plant was definitely not in prime condition even when it was shipped, let alone after the trauma of surviving winter shipping. But whether the growth is healthy or not is really my judgement. My question is whether there would be another possible growth bud that would sprout. Thanks for responding, though.
More to your point: I'm thinking the new growth is now damaged and beyond usefulness. I could be wrong but I think I'm right. Given that, wouldn't it be better to snip it off so the plant's energy can be directed to generating another new growth (in addition to completing the maturing growth?) I think so. But I just don't know that much about the existence of nature's "fail-safe" mechanisms in such cases.
Last edited: Jan 24, 2021

No. A photo would not be illustrative of the problem. I suspect crown rot in the small new growth. Surely there have been instances of a developing new growth having been damaged and whether the plant was able to start another new growth to replace it.
If nothing else, I'll do it the "surgery" when I repot it (soon) and wait to see what happens. Thanks.
Last edited: Jan 24, 2021

Sorry, that was not clear to me.
In general pictures do help, otherwise only a look into a glass sphere will give the right answer...

musa said:
Sorry, that was not clear to me.
In general pictures do help, otherwise only a look into a glass sphere will give the right answer...
Click to expand...

You’re right. I’ll try. At this point I’m confused myself.

musa said:
Sorry, that was not clear to me.
In general pictures do help, otherwise only a look into a glass sphere will give the right answer...
Click to expand...

Here are three pictures of the aureum. The first one shows the small leaf that I've been watching for growth (still nothing). The second is from the top looking down into the crown of the growth with the small leaf. The third is from the other side to to show the "healthy" growth. I know it looks terrible, but It's been treated and seems stable, and is growing.
At this point, I'm not sure which one of those two is the newer growth. The first picture with the little leaf - I had assumed that that was the new growth because it was smaller and looked to be developing. But now I remember that when the plant came I took a mature sized leaf off of that smaller growth because it had been damaged in transit. There is also a mature, older-looking leaf on that growth that is low, and juts off into the backgroun (which you might not be able to see.) That older leaf also seems stable.
General comment, the plant looks better in the picture (believe it or not) than in real life. My SmartPhone enhanced that green quite a bit.
So maybe I'll leaf that smaller growth alone, whatever it is. Taking it off might set the whole thing back. Roots looked good when I slipped it out of the pot just to check, but it is rootbound. Thanks for your interest. 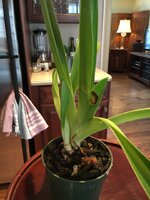 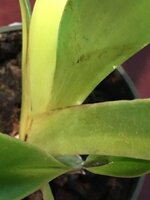 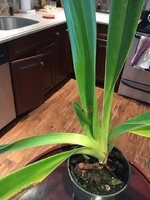 Great that pictures were requested (thanks, Michael and Ozpaph). They might have been a failure but it spurred me to repot the guy. Lots of good roots, but not too many fresh tips. Hopefully the new digs will make that happen. It took me almost an hour to remove the old medium and disentangle all the wrapped roots, but it was worth it. 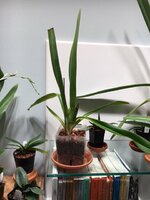 Repotting was a good idea as the medium looks broken down.
You made the black markings to control growth on the bottom leaves, which won't grow anyway as they are already fully grown. The brown spots on the younger leaves I'd be more concerned of. Observe them closely for any changes, but I'm not sure what it is.
Good luck with it!

No, I think you misunderstood. I didn't make those marks or seek to control any growing. I just put a little dot on a leaf from the larger growth that the little leaf from the other growth was growing up against. You know, like parents make a mark on the wall to see how much the kid grows from year to year. All of those other brown spots were bacterial rot that turned brown after treating with Phyton. I consider them "cured." But yes, will watch. Thanks for your response!