Keeping this for posterity, might lose my whole collection

A bit of context: I live in a old-style row home & the neighbor's house shares a wall with me.
So, last weekend, the next-door neighbor had a basement fire, which spewed tons of Carbon monoxide, ethylene, and who-knows-what into my basement.
I'd already been dealing with "black dust" for a while, not to mention having the odd plant issue that I just couldn't solve: a healthy plant suddenly having deformed leaves, then suddenly being okay again on the next leaf, that sort of thing.
Welp, exhibit A: it turns out the moron had cut the pipes to his house heat and had the furnace retrofitted into some kind of hot water heater in some half-baked scheme to save money. On top of this, and probably because of it, he had been running the furnace without having it professionally cleaned, and last week it finally caught fire. 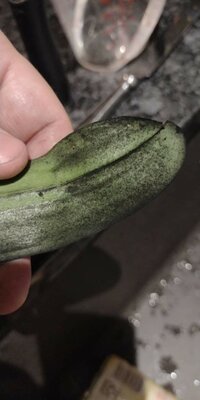 Symptoms began as chlorosis of older leaves, or at the crown followed by rapid weakening and subsequent invasion of opportunistic pathogens. Onset was rapid, within 12 hours.
A seedling, 8 hours after the incident, symptom free earlier that day: 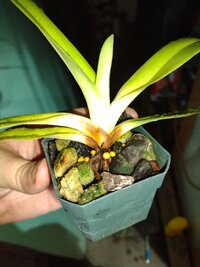 Unsurprisingly, young seedlings were most affected, lost a good 25 (so far) tigrinums that were only 2 months out of flask. My natives, which are already dormant and in the fridge, or upstairs in my bedroom, seem to have escaped the carnage.
Defiantly, neighbor turned the furnace right back on the next day.

If you're thinking: "WHAT IN THE HILLBILLY TRAILER TRASH HELL!?" Welcome to central PA.
A

OMG! I think I'd present him/her with a bill for the damage. Probably won't do any good to do it, but is a mighty temptation.

Now don't be bad mouthin' hillbillies. I'm one of them and I don't do such stupid things.

Well my mood is somewhere between: "Burn the witch" and "Shin Godzilla purple mouth laser."

What about all your awarded plants?

That sucks... Maybe it's time to have a second fire? My neighbors just have junk cars.

Justin said:
What about all your awarded plants?
Click to expand...

Most are in California with my friend, the rest...we'll see.

That is absolutely heartbreaking. I can't imagine how awful you must feel helplessly watching your beloved plants die because of someone's stupidity. Thank goodness he didn't end up burning down the entire row home. I think you should sue him for damages.

badly damaged: both Cryptopus suffered root loss, most species multiflorals lost an avg of 2 leaves each, Phalaenopsis schilleriana barely survived & will take at least a year to recvover

Minor to moderate root loss on many of my Cattleyas.

Majority of spiking/sheathed plants blasted. Nearly all open flowers fell off in 48 hours.

It could have been worse.

Most heartfelt commiserations! Glad to hear that not the whole of your collection was destroyed, Tony!

I wonder whether the reconstructions and amendations of your moronic neighbour's furnace have been totally legal or according to safety regulations? If not, you might one way or the other try to make him pay for damages? Maybe start with asking him for compensation eye to eye - if that is without result, then make a case through insurance or considering to seek legal representation (i.e. find out whether suing for damages would be too costly?)

Man, that is a total bummer. Sorry to hear that happened, honestly.

Sorry to hear about what happened. At least the fire did not spread onto your property and caused much more damage.
It's potentially very dangerous to have idiots around, especially when you share a wall with them. Yikes!!
If I ever move out to the country, I will have a detached house away away from everyone else.

I'm pretty sure the fire marshal is not happy with him.

A little update to this, plants seem to be recovering well, even the Cryptopus are starting to break out of their funk, have a few multiflorals in sheath & spike, and a single Mormodes bud survived and will bloom in a couple days, hah.
A

I'm so glad to hear this! You did a very good job cleaning the plants. HOORAY!

I remember as a young child living in a cheap rental heated by oil brought by a big truck. The soot would collect on the walls inside the home. I never forgot that soot on the walls to this day.
N

P
My first Paphs in years on the way

Aquarium house for my flasklings