I don’t normally repost plants that flower more than once a year but this one is a really exceptional clone.
It’s one of the foundation clones of the modern race of dark coloured lueddemannianas.
It’s the first time it’s flowered again in the summer after flowering in the spring.
For me, second growths in summer are common, but not flowers. 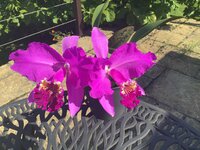 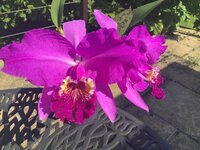 after last year’s scares with rot and chat about culture I repotted this plant carefully in the autumn, not the optimum time. One of the leads responded normally and grew and flowered in the spring but this one just sat there and rooted, probably because of the repotting. It didn’t start to grow a new lead until later in the spring and this is the result.
If I could arrange it to flower twice a year every year , I probably would!
David

Some lueddies with multiple growths can stagger blooms over spring into summer. So it’s possible.

Thanks Leslie, I was hoping that that may be the case.

Outstanding color, great job!
Somehow they’re always a mystery. I suppose that’s why we do what we do for these beauties.
H