BC. David Sander’s Mimic (Mount Hood ‘Mary’ AM/AOS x Brassavola cucullata) I got from Waldor openhouse in March is in bloom for the first time for me!
A big pale green flower at 7.5 in wide with hint of red along the petal edges & on the backside. Quite nice in person!

Fresh open, so no scent yet. I’m curious to find out if this will be fragrant at night or during the day.
Mount Hood ‘Mary’ is a big white flower with yellow eye on the lip and just a hint of pink/lavendar near the lower tip.
I assumed this was a mericlone but my flower looks very different than the one at the nursery which looked a lot more like David Sander but not open flat.
The first photo below shows the flowers of specimen at the nursery in March.
And the rest show mine. I will post more photos when the other bud opens up. 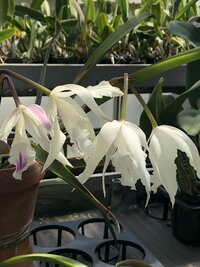 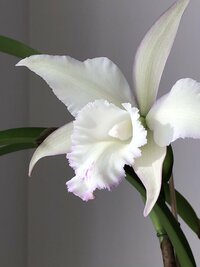 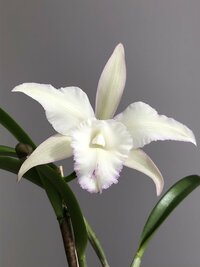 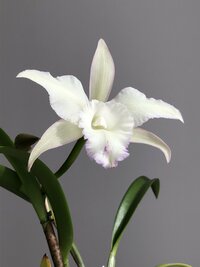 Nice! Love the shape and colour.

Thats quite pretty. I wonder why someone thought to make this hybrid???

Ozpaph said:
Thats quite pretty. I wonder why someone thought to make this hybrid???
Click to expand...

Crossing Cattleya hybrids back to Brassavola nodosa has been very popular and resulted in some great flowers.
Then, there have been some other attempts using digbyana and cucullata with moderate success, though not as good as those made with nodosa.
David Sander (digbyana x cucullata) is highly sought after. One of the US breeders remade the cross and offered it last year. Not surprisingly, it quickly sold out as soon as the new list was released.
While I don't know the back story to this hybrid, as the name indicates, someone was curious and made a cross using a well-known hybrid and cucullata. Among the progenies was one that looked much like David Sander, hence, the name David Sander's Mimic?
I think mine has turned out with a fairly nice balanced look between both parents. I would have liked a bit more wild look, but I'm very happy that it is not full like some other seedlings I've seen online. That would have been pointless indeed.
J

love the soft color of the picotee edging

Just1more said:
love the soft color of the picotee edging

It really is quite nice in person!
Also, the back of three sepals are dark pink.

Not everything has to be a big round dinner plate to be beautiful, love it!

NEslipper said:
Not everything has to be a big round dinner plate to be beautiful, love it!
Click to expand...

The second bud just popped open. Will have to wait for a couple of days before the new photo.
But here's an update on the scent.
About three days past opening, the flower started to emit fragrance at very odd time.
From about 2am till morning, say 7:30ish and then nothing.
Cattleya x Brassavola hybrids that I had in the past all followed Brassavola when it comes to its timing of fragrance: from dusk till dawn.
Anyways, the scent is also rather off to my taste. It is not sweet citrusy but more reminiscent of Angraecum didieri which I absolutely can't stand.
Good thing the scent is on when I'm sound asleep usually. lol