To go with the one posted by Dodidoki.
This plant has been through the wars.
Last winter it had zero roots after I had failed to repot it for a number of years, just a few black stubs.
In desperation I sat it in a container that held it tight and added water up to the level of the rhizome. Something I had come across on the net for cymbidium back bulbs with no roots.
It sat like that for a couple of months and then in spring a bunch of new roots appeared, so it was repotted into my usual orchiata.
Things then developed normally and the pot is now full of vigorous white roots and it’s given me two blooms.
I call that a result. I don’t know whether the water treatment was any better than just sitting the plant in sphagnum when it was rootless.
David 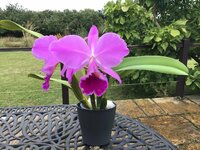 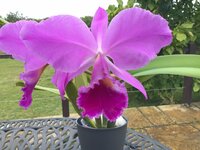 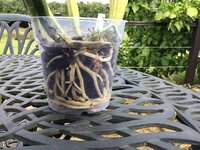 Great job in reviving it!

Please explain the ‘sitting’ in water method in more details. I have not heard of this for cattleyas.

Neither have I Leslie!
it was a do or die thing as the plant was very close to being tossed.
I wedged the plant into a large mug and added rain water with a tiny bit of feed. The water came up to the level of the rhizome which was horizontal. The bottom of the rhizome was in contact with the water, so was wet all the time but the top of it was in the air.

this is the video I saw that made me want to try it.

the cattleya has four or five good sized bulbs so has a fair amount of reserves and this made me think that it was in a similar state to this cymbidium, so why not try it out.
It took a couple of months before four of five new roots appeared, in the spring. It was then repotted into orchiata and treated normally although I didn’t give it any sun until the roots were a few inches long.
Whilst the plant sat in the water, nothing much happened. The bulbs did not plump up from their fairly shrivelled state. That didn’t happen until the roots developed later in the year.

Very nice, David.Great saving.I never heard about this water therapy at catts.Furthermore my experience that rootless cattleyas produce roots fast if there is no water at all at their rhizomes.My rubra form is in bud too, maybe one week...

Thanks dodidoki. My reason for the water treatment was that the plant was severely dehydrated and I wanted to see if this would help. I am not sure that it did much but at least the plant didn’t deteriorate further.
T

Good Job!
Water treatment interesting. Spag method often works for me On Catts. I have had success with cymbidium back bulbs by placing in a plastic bag with a damp paper towel, in the dark for a month or more.

Wonderful. I have a two rubra and one semi-alba labiata seedlings. Looking forward to those early autumn blooms to kick in after rex season.

Amazing roots, congrats on the culture! Beautiful flower as well, glad you were able to revive it!

Well saved, David - and absolutely worth your while! Very lovely!

First of the labiatas, rubra ‘schuller’