A couple of triploid Fritz’s.

That is an interesting issue others have noted periodically. From the beginning of importation of orchid species, it was obvious that some plants were markedly superior to others and some of the time it turned out decades later that the reason was polyploidy. We can’t expect a diploid species or hybrid to perhaps compete with polyploid versions. Yet, the award standards don’t care, so the polyploid plants usually win. Until there is a confirmed tetraploid kovachii, a triploid FS is a far as it can go. Someone is going to take a diploid cross using very good besseae and kovachii and then convert it chemically in the lab to produce full tetraploid plants. It will be very interesting what these look like. They could be better than our triploid versions.

Terry,
according to Popow he was selling tetraploid Fritz last autumn, probably by using this method.
His web site showed some plants with excellent blooms.
I bought one and flowered it in the summer, it’s the one with the purplish flowers. They were big but the petals reflex after a time.
The growth is very vigorous and the flower stem produced two branches. For me, the jury is still out as to whether it is a tetraploid. 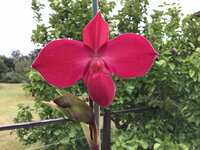 That is believable as a tetraploid! Did you measure the width of this one? It "feels" bigger in the picture.