Just some photos I took at the show. The exhibits aisles were very tight and there was a good sized crowd, so apologies if some of the angles are not ideal. Mostly Paphs- but I had to throw in a few others I really liked.

None of these are my plants- all were in exhibits at the show. Names are reported exactly as presented on exhibit labels.

Paph. Lady Rothschild on the left, and rothschildianum on the right, 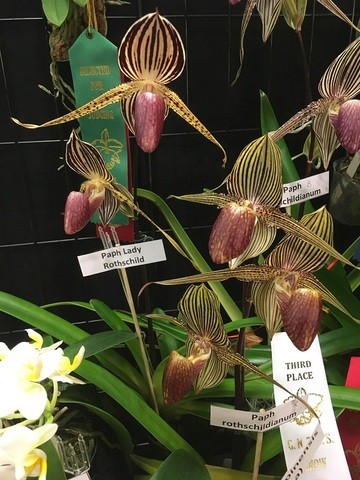 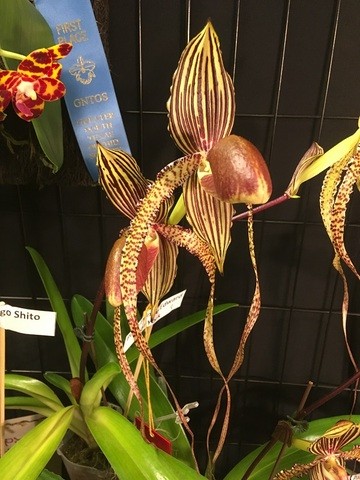 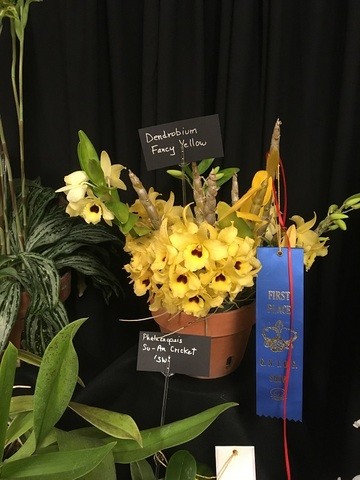 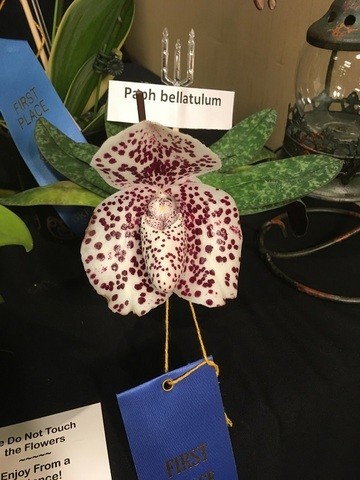 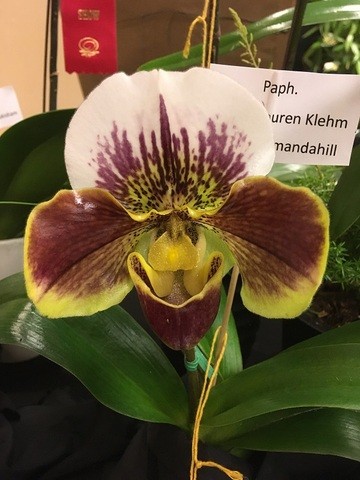 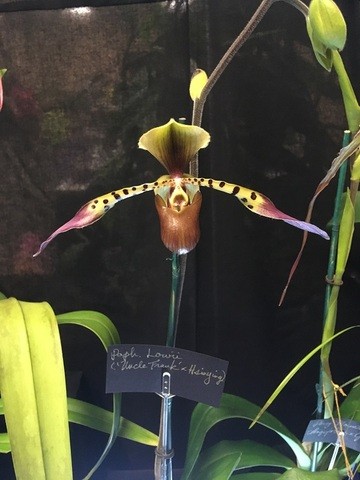 Paph.- no show tag and pot tag was buried deep, so no way for me to look without reaching into the exhibit. I am guessing perhaps parishii x haynaldianum, but unsure and could be a more complex cross as well, 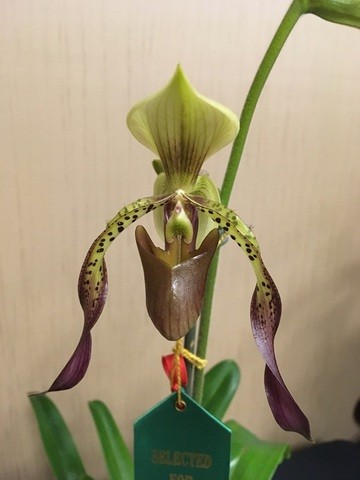 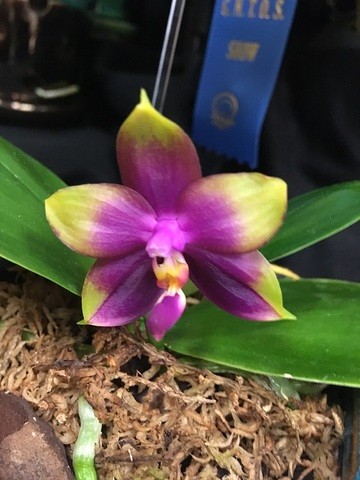 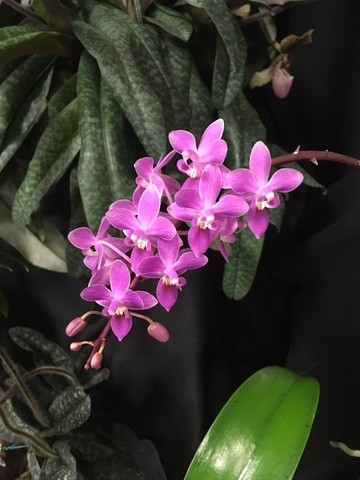 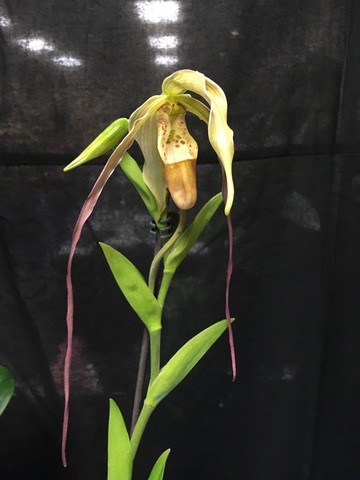 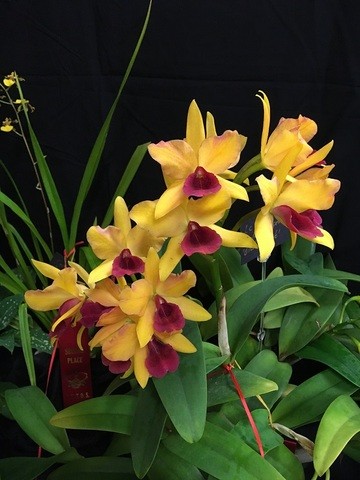 Phal. Arakaki Spring Fairy. As a general rule, I am not a fan of the harlequins- but I really liked this, 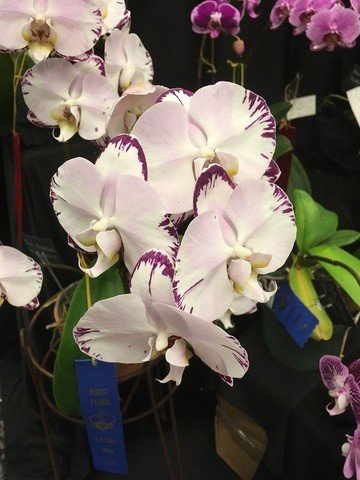 Den. Enobi Purple 'Splash' AM/AOS. First harlequin Dendrobium I have seen (which may not be saying much- it has been 6 years since I attended an orchid show or judging), 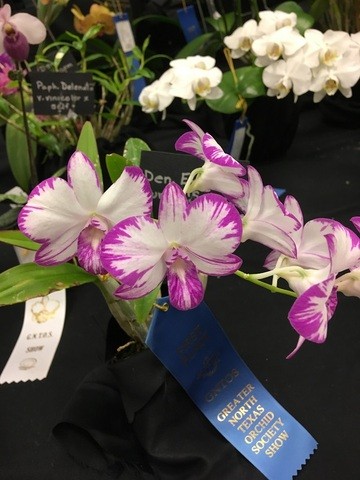 And last but not least- Paph. Fairly Sauced. Great name, and the photo does not do it justice. Of all the plants I saw today, this one really captured my attention for being so very unique (in a good way!), 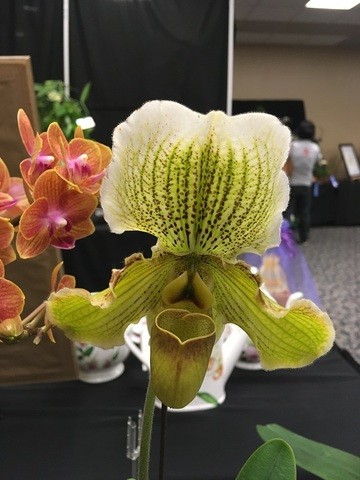 Thanks for posting all the pictures! I love to see photos of orchid shows!

Thanks for posting.
I thought the phal would be considered "splash" not harlequin?
Theresa Hill of Hillsview at the January Paph Forum gave a great presentation on farrieanums and their hybrids, including fairly sauced
T

Thanks all- happy to post. I enjoy this section of the board more and more because I can see what is coming to the shows.

Linus- thank you for advising of splash versus harlequin. I guess it is obvious it has been a few years since I went to a show. The last time I did a show, all of the non-traditional color forms were kind of lumped into that "harlequin" name, and were considered by many to be lesser plants. Many AOS judges would not even consider them for awards- and I have to confess at the time I was leaning in that direction as well.

But just about every exhibit in the show yesterday contained at least one plant- some many- that would have been termed a "harlequin" back when I was last actively selling and exhibiting at shows. So clearly times have changed.

And while I still think most of them are unattractive, the two I posted are examples that I really found quite lovely. Plus looking at all the flowers it appears to be a stable coloration pattern- so why not?
A

Thank you for posting. That was fun!!
N

Another of my hybrids has bloomed: Paph Stephen Male